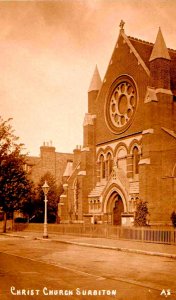 Charles Lock Luck an architect, born in 1833 at the Paragon, Blackheath, lived in Surbiton from 1860-1890. His works included nine churches, including Christ Church, Surbiton, St. Matthew’s, Surbiton, St. Paul’s, Kingston Hill, the enlargement of St. Peter’s, Norbiton, two churches on the Isle of Wight and two in Kent. He was also the architect of the Kingston Workhouse Infirmary [currently Regent Wing of Kingston Hospital], two schools in Kingston and the initial phase of Ridley Hall theological college in Cambridge. The costs of some of his projects and the building contractors are stated. When not engaged in his busy architectural practice, Charles Luck led an interesting and very full life of public service, which included support of Christ Church, involvement with the local temperance movement and membership of the Surbiton Improvement Commission. He died in 1890 and was buried in St. Mark’s churchyard, Surbiton.

David Kennedy is an active committee member of the Kingston upon Thames Society. He has a PhD in Human Environmental Science at King’s College, London, and an MA Values in Education, Philosophical Perspectives at the Institute of Education, London University. He also holds a Honorary Research Fellow in Biomedical Sciences at Kings College London and later at Cranfield University in Bedfordshire

In his retirement David has continued to be very closely involved in Kingston’s local history, family and related voluntary work. He is currently the editor of http://www.kingstonhistoryresearch.co.uk where he shares his research findings, some based on digitised material, with others who may be interested in them.

Coming to our public meetings

Unless otherwise noted, all our meetings are held in the Judge Lecture Theatre, Tiffin School, Kingston upon Thames KT2 6RL. Click here to see a map of the area.

Access is from the London Road entrance where there is free parking available, subject to other events happening at the school. There are bus stops outside and opposite the school entrance, and the main bus and railway stations are within short walking distance. The Judge Lecture Theatre is accessed through the main doors next to the new circular school cafeteria. It is on the ground floor and we believe you will find it accessible.

Free admission for members of the Society. Members of the public are very welcome to attend and are asked to pay £2 toward our costs, alternatively they can join the Society on the night for just £10.