New proposals for Surrey House – so called ‘Eden Campus’ – a much larger mixed-use redevelopment of the site, (now including Lever House and the St James car park) with approximately 150 new homes, a new international head office for Unilever and retail space… and a 22 storey tower nearly as high as Tolworth Tower

The Surrey House developers are back, this time the WHOLE site is up for redevelopment including Lever House and the car park building.

The scheme includes a 22 storey residential tower block as their first move – which is a mere half metre lower than Tolworth Tower!

They love a fight these developers. Last time they went to appeal because the planning department took too long – while planning discussions were ongoing – and lost.

Residents have been there and done that (Post Office, Eden Walk, Kingsgate Road to name a few). We know that views of what the scheme will really look like – the “Visual impact studies” will be withheld until the last moment. So we have provided our own mockups at the bottom of this post.

Conclusion: It’s a no

We would ask the developers to save everyone’s time by withdrawing this unrealistic submission and to come back with something more plausible. And perhaps this time ask US what our ideas are for this Kingstonian family jewel

The developers of this large site launched their second public consultation on Monday 3rd August, with further but still vague information about their plans . The on-line only consultation will run for three weeks until Monday 24th August.

The virtual display of the plans is of very little practical use, but the PDF versions do afford good viewing access (link here). There will be a dedicated team online to answer any questions in real time from 10am-5pm Monday 3rd August, Tuesday 4th August and Saturday 8th August.

If you are not able to view the virtual exhibition at these times the presentation will remain on the website www.edencampus.co.uk with the opportunity to provide feedback for three weeks until Monday 24th August.

GET IN TOUCH WITH THE DEVELOPERS – If you would like to speak to the project team to learn more about Eden Campus or do not have access to their website, call them on 0800 093 4312. Alternatively, you can email your questions to edencampus@communitycomms.co.uk or find out more at www.edencampus.co.uk 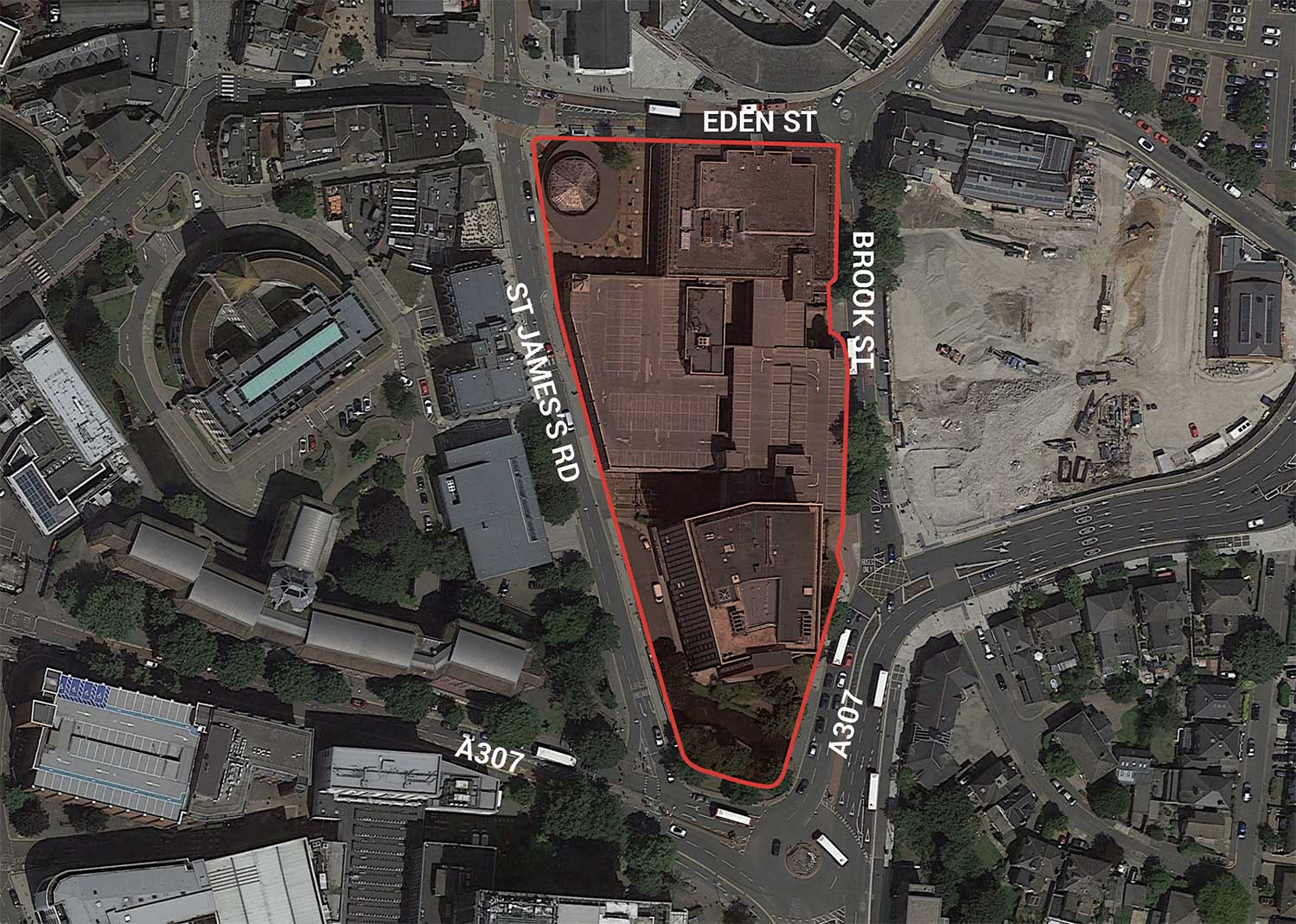 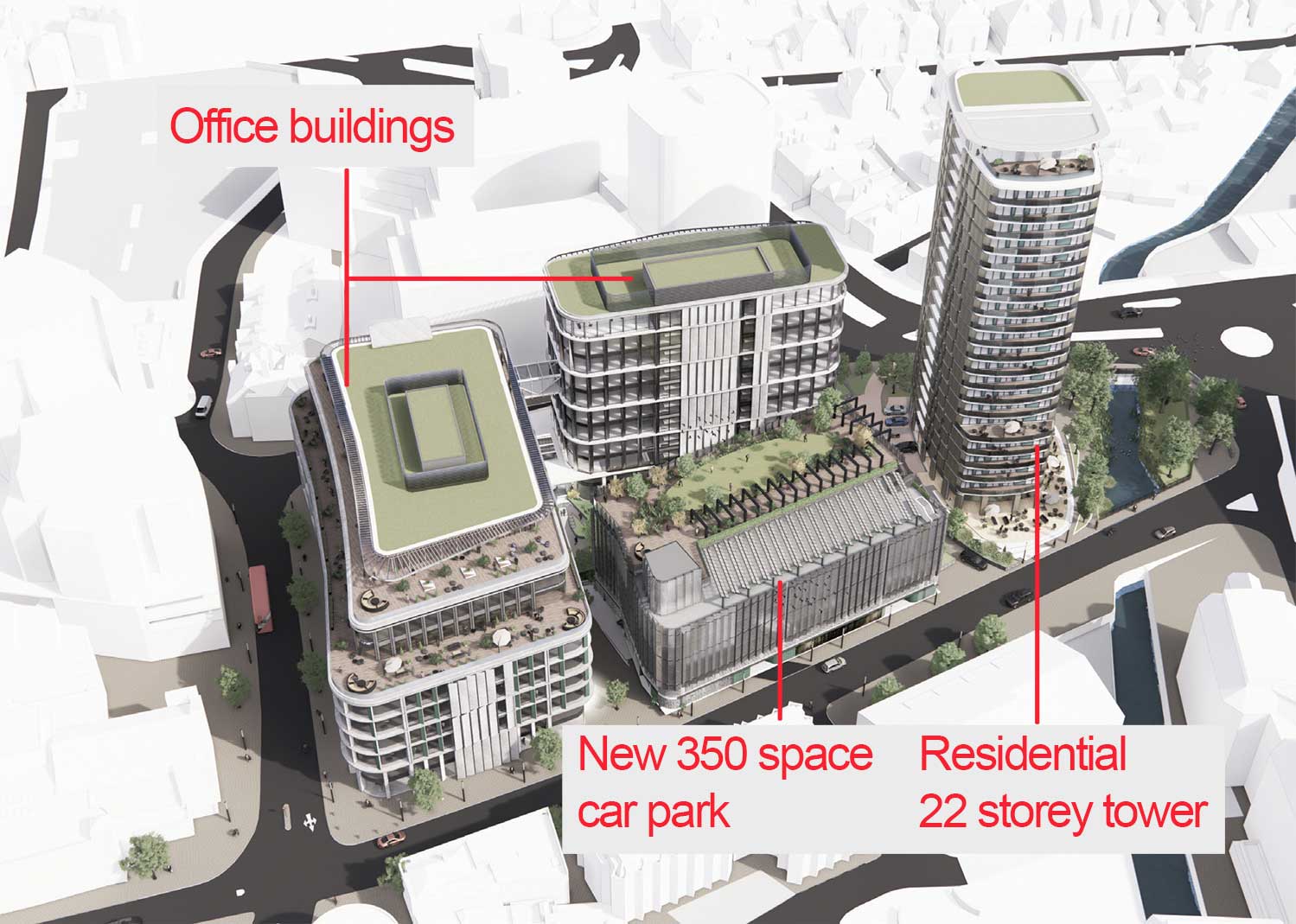 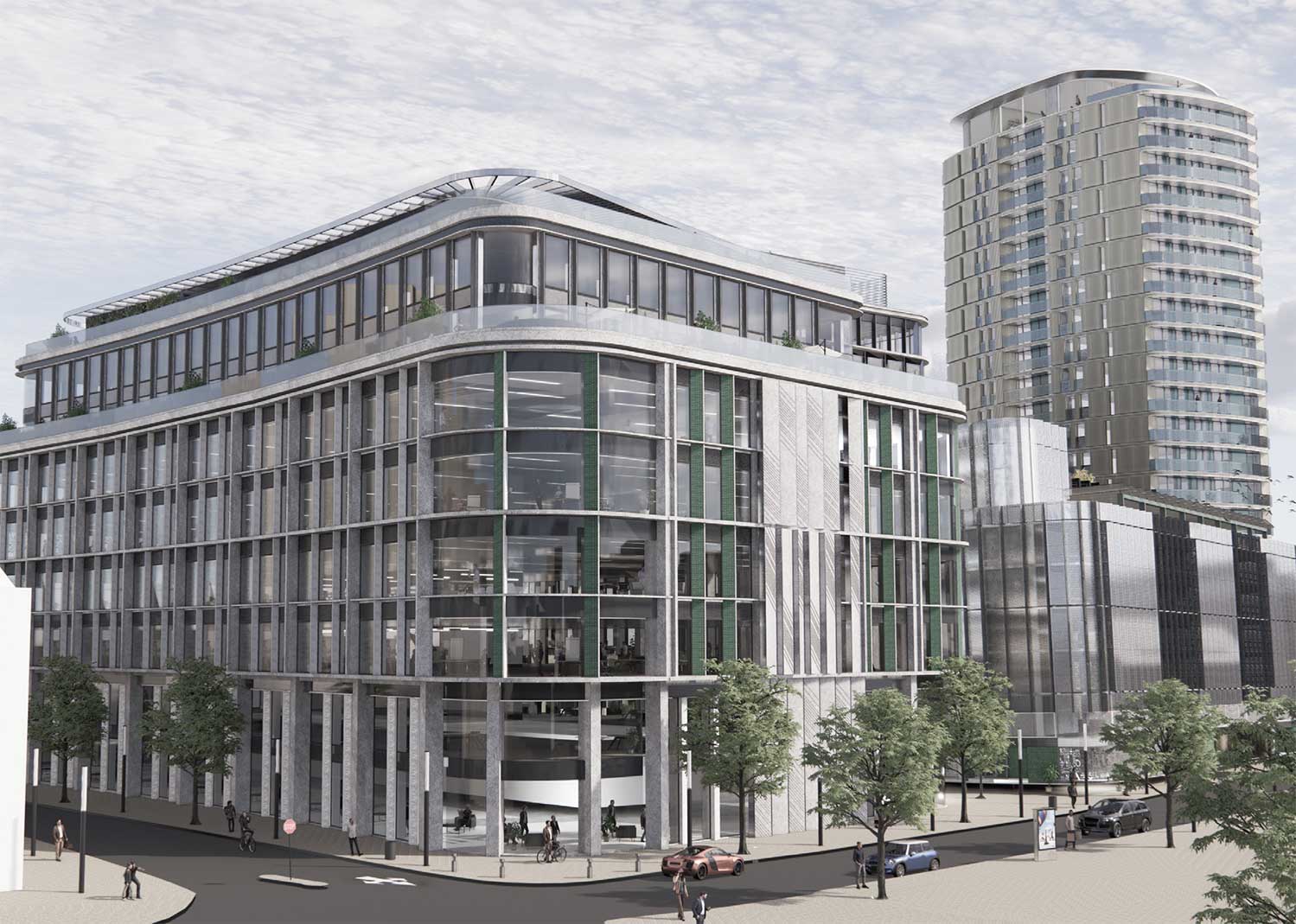 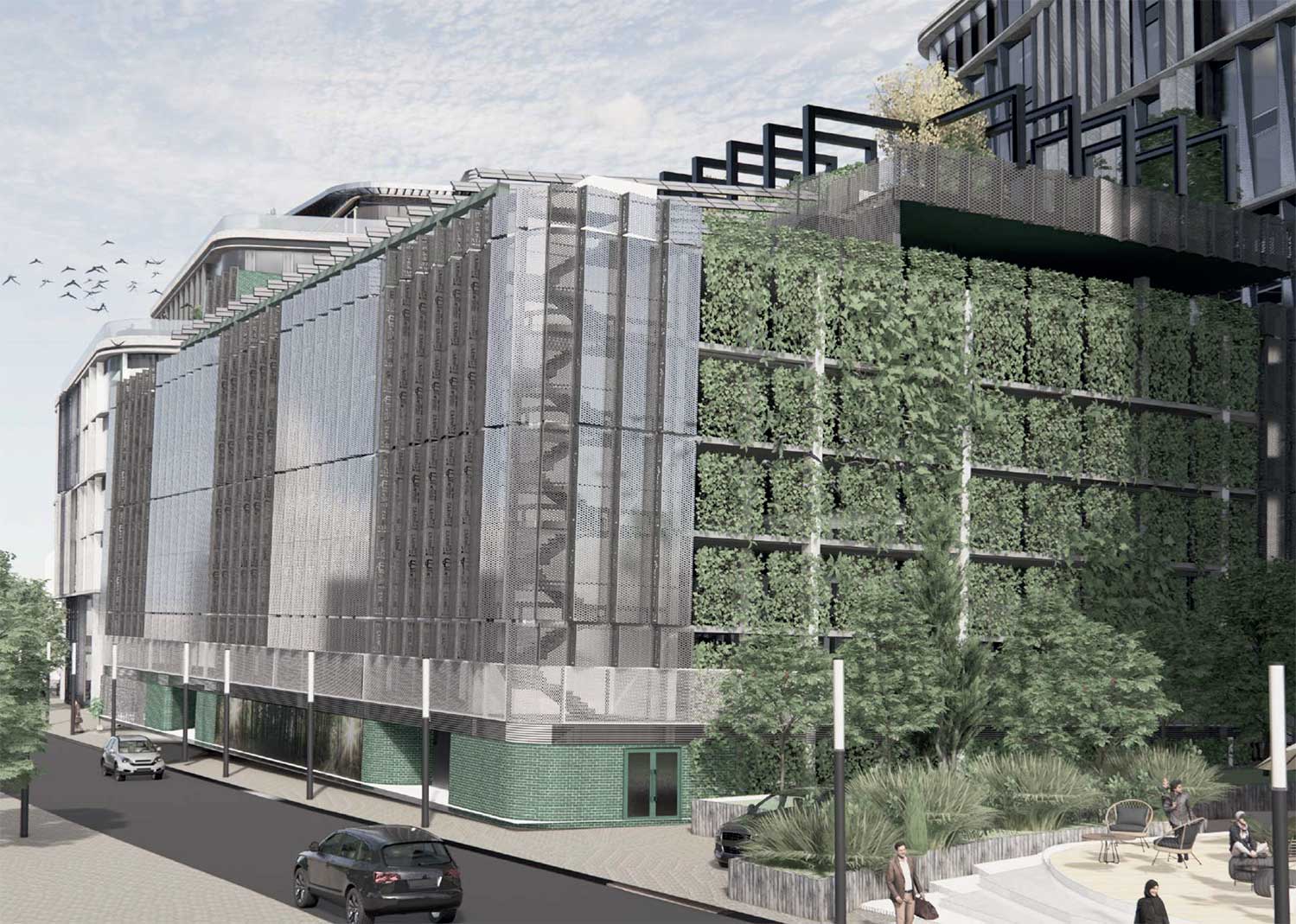 The Society’s view is that Covid or not this online presentation does not qualify as consultation. Consultation is where the views of the community and other stake holders are gathered prior to a proposal. Nor does the online chat system provide an adequate solution for proving feedback or receiving answers.

In particular our objections are:

• The plan proposes a retail element, an extraordinary tone-deaf idea for a town with clear evidence of the trouble the retail sector is in.

• The site proposes a 350 space carpark. Surely the days of building carparks is an irrelevance, especially above ground?

• A 22 storey residential building is another example of developers claiming to honour the town’s heritage and its aspirations with no evidence whatsoever that either of those two objectives will be met. (at 80.5m this is half a metre shy of Tolworth Tower)

• The whole site in no way represents a cohesive idea for this large and important plot, every bit as much a gateway project as was The Old Post Office. It has been divided into four discrete sections with three functions: office, residential and parking instead of grasping the opportunity to make an integrated community asset that acknowledges how things are now.

• The justification for the 22 storey building is that it will enable affordable housing. Affordable housing is a bankrupt idea, that cannot be delivered. The Old Post Office apartments, for example, range from £712,500 – £1,000,000. A 30% reduction on the cheapest flat (to approx £500,00 is simply not affordable by a key worker or indeed many people – a mortgage this size would require an income of £100,000)

• We welcome the (planned) relocation of the international Unilever HQ to Kingston, with the potential to create hundreds of new jobs but the trade off is not at any cost, certainly not at the cost of towns identity as an ancient market town.

• How is it that the design completely ignores the ideas encompassed in the Building Better Building Beautiful commission report?

About which The Housing Minister said on January 30th “The three main aims that you’ve set out with great clarity and eloquence I think will help us get there….Firstly, to demand beauty – not just for exceptional schemes that win awards, or which are the preserve of the wealthy, but for the places everyone lives in and the places we pass by every day.

Second: That we as a society, as individuals and we, as a government, must have the confidence to say no to schemes which we know in our hearts are bad for the people destined to live in them and the surrounding community….

…So let’s build more, but build better and in turning to the report’s third aim, the need to promote the lost concept of stewardship – let’s ensure that all those with a stake in this agenda take a longer-term, sustainable view of communities as communities that are places that must grow but must evolve, that must adapt but which can do so in a way that works for people.”

Drag slider to view before and after images
(height of tower as shown here is 70m but actually the proposal is for 80.5m as confirmed by the developer, significantly higher – The Tolworth Tower is 81m)

(NB unverified before and after images by local resident) 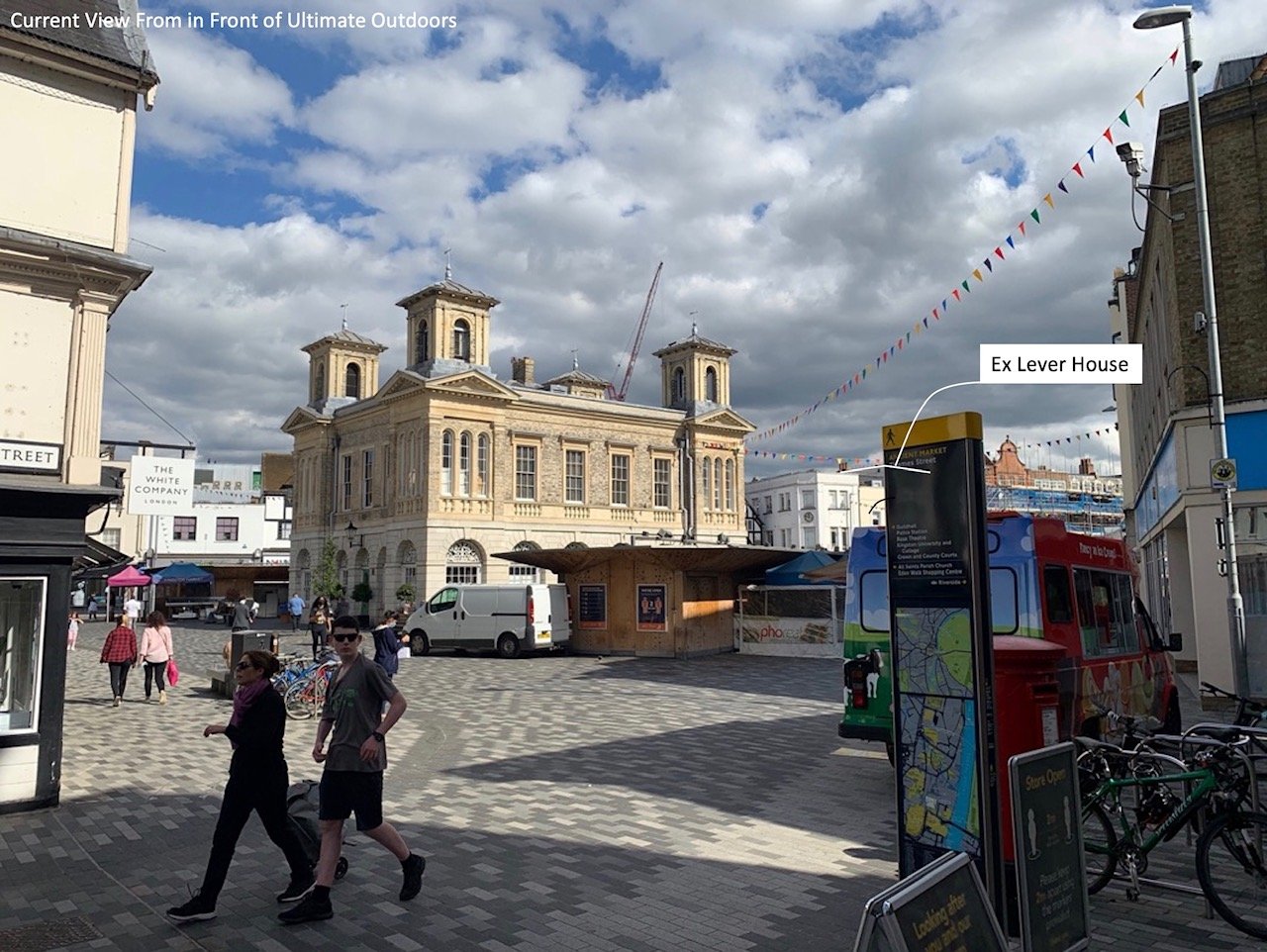 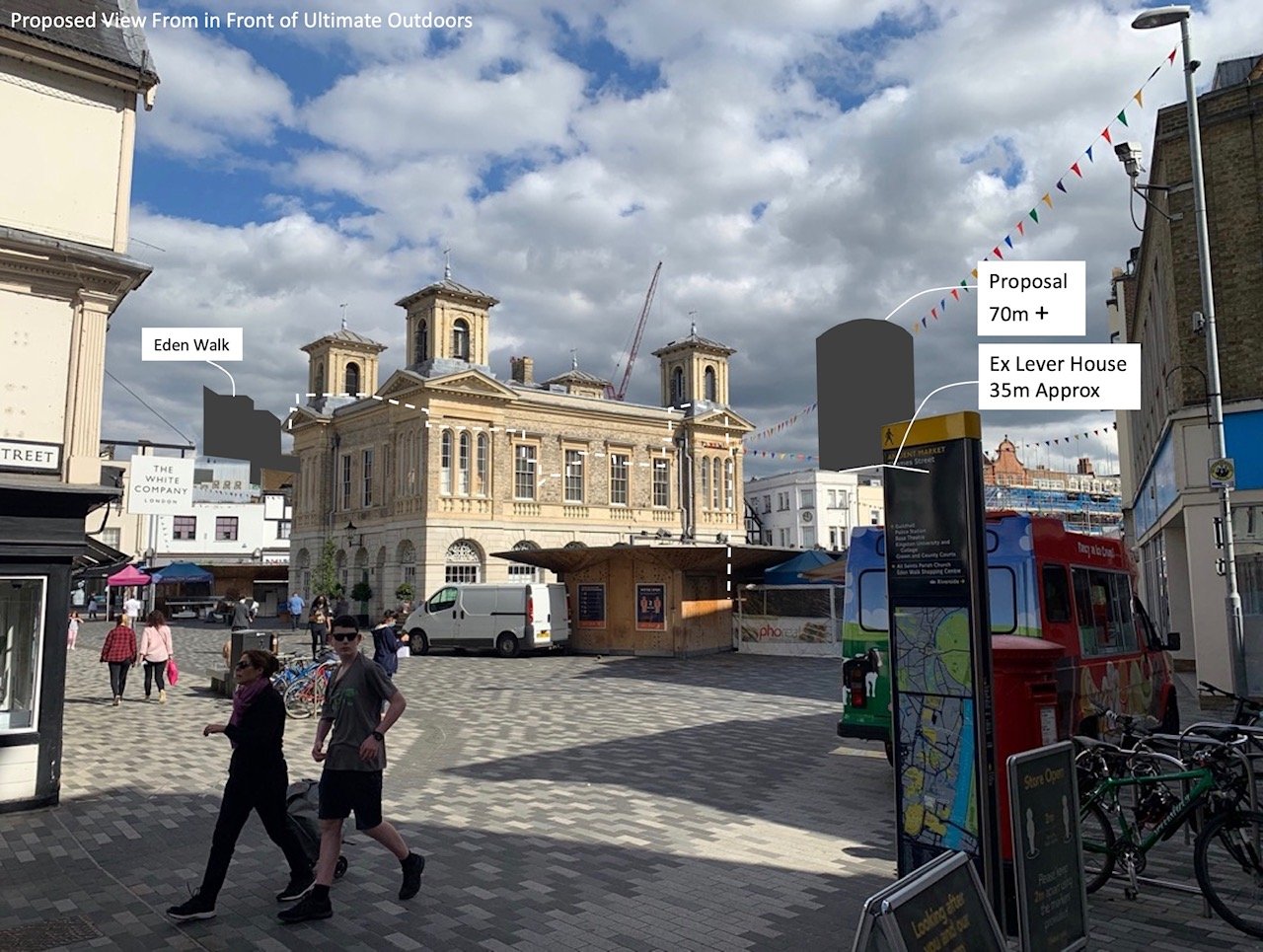 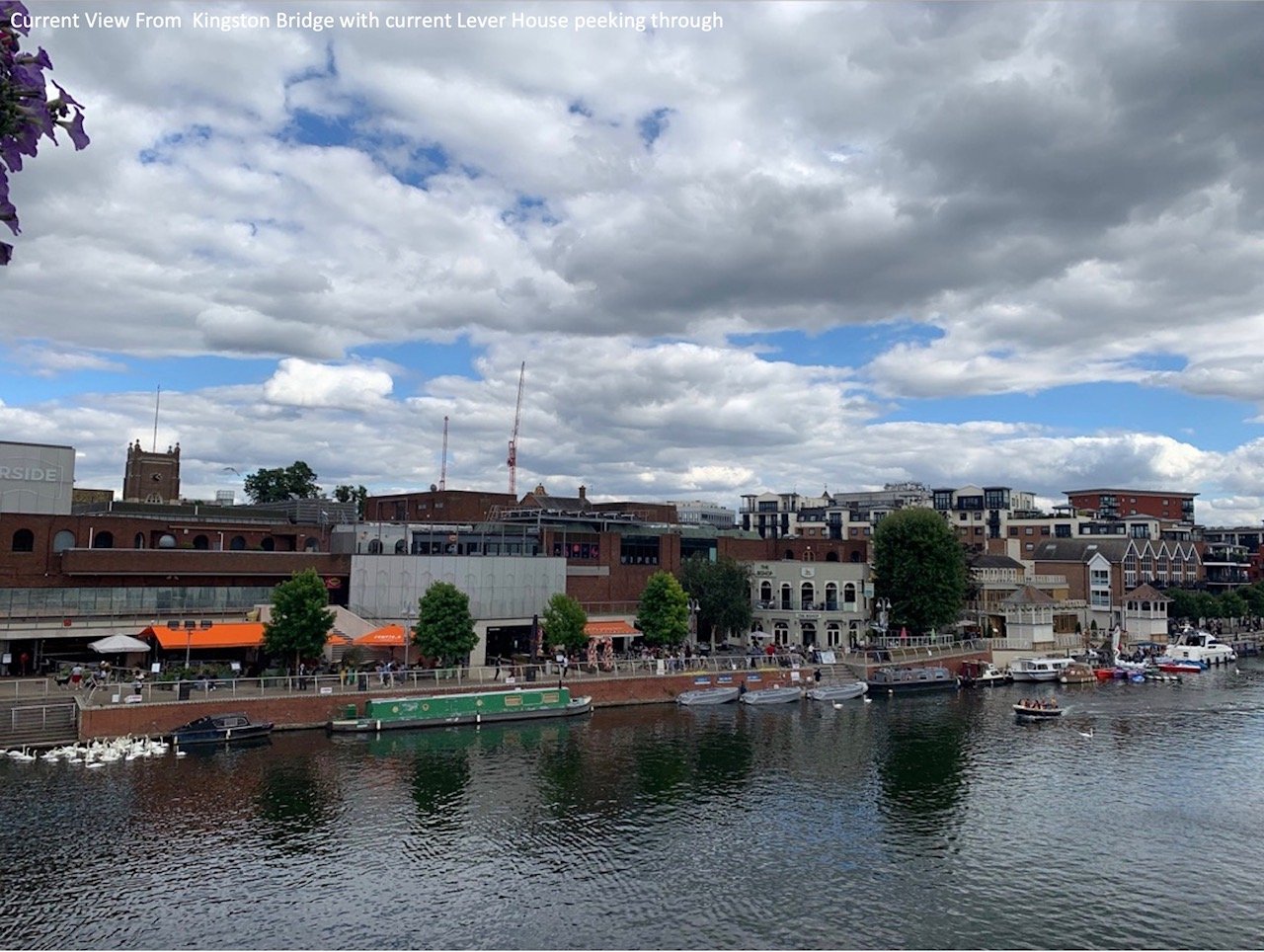 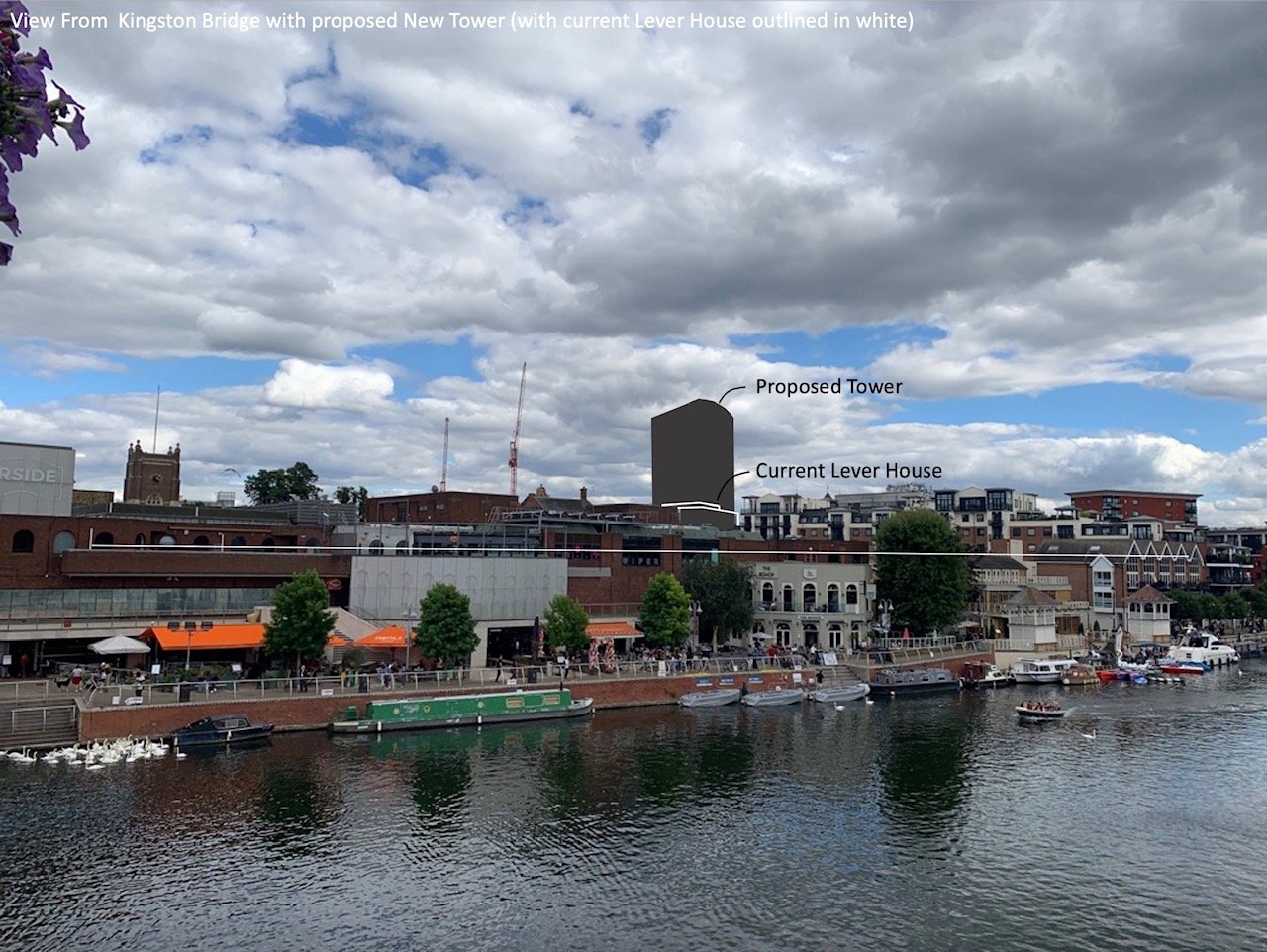 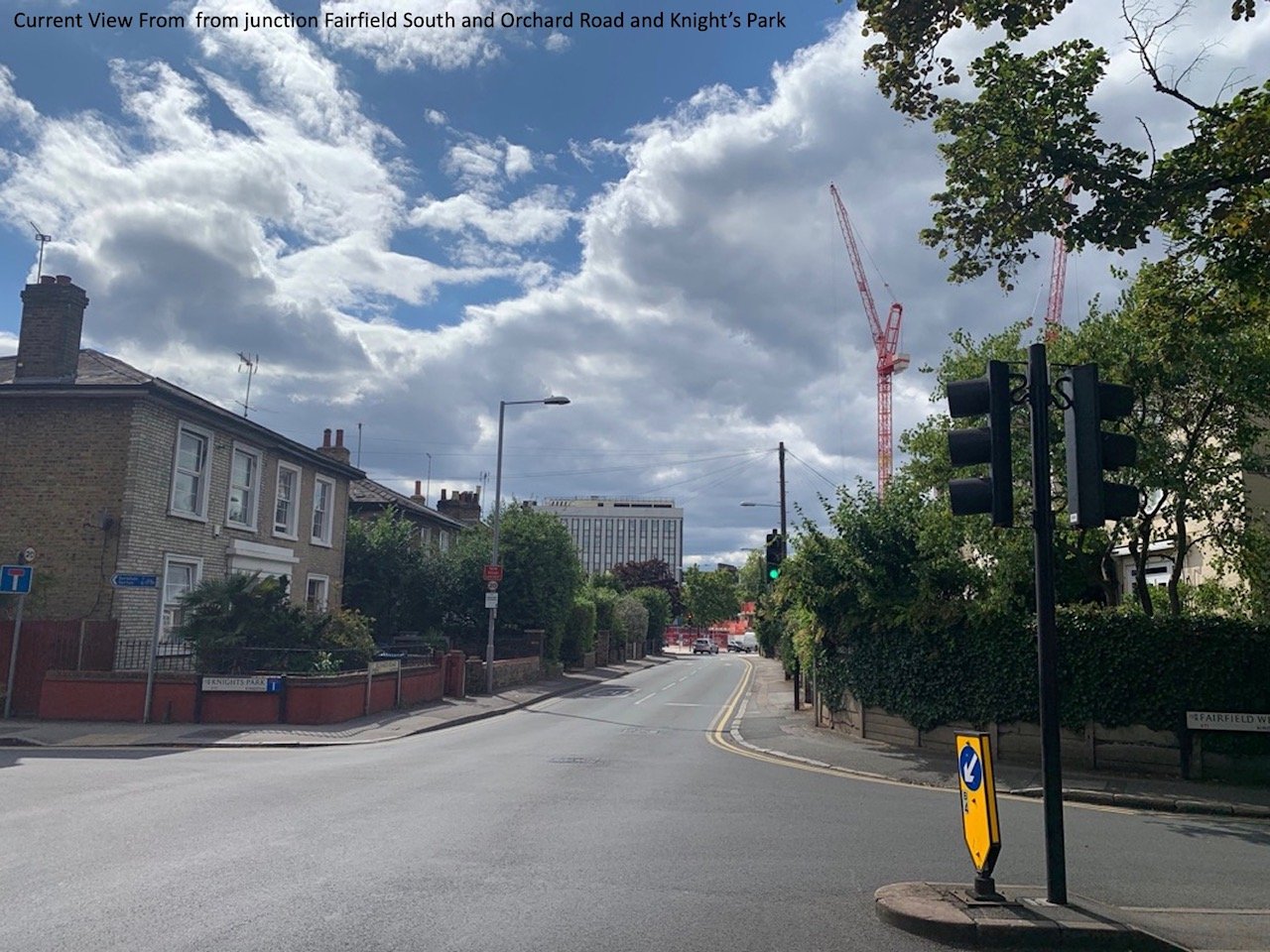 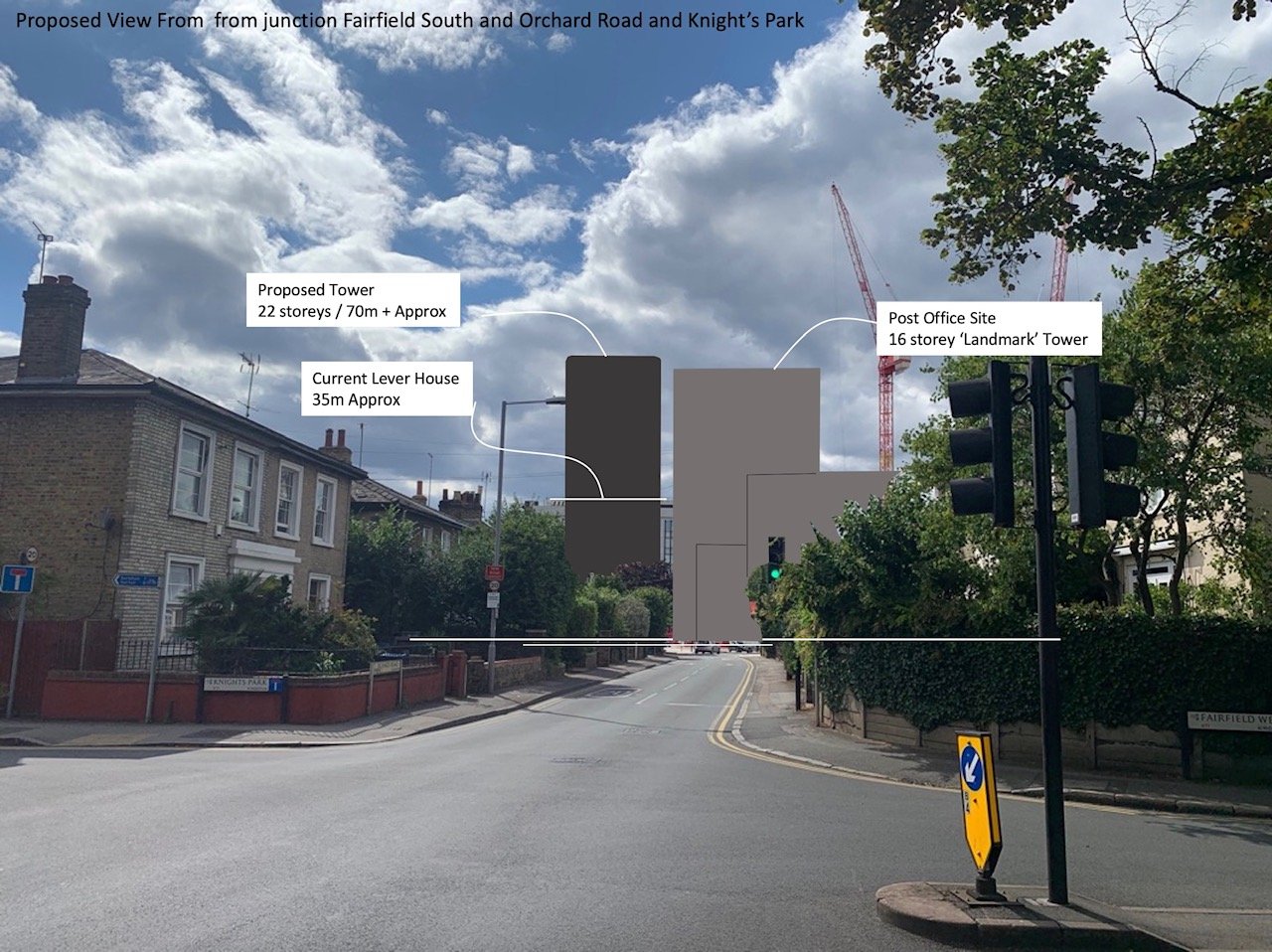 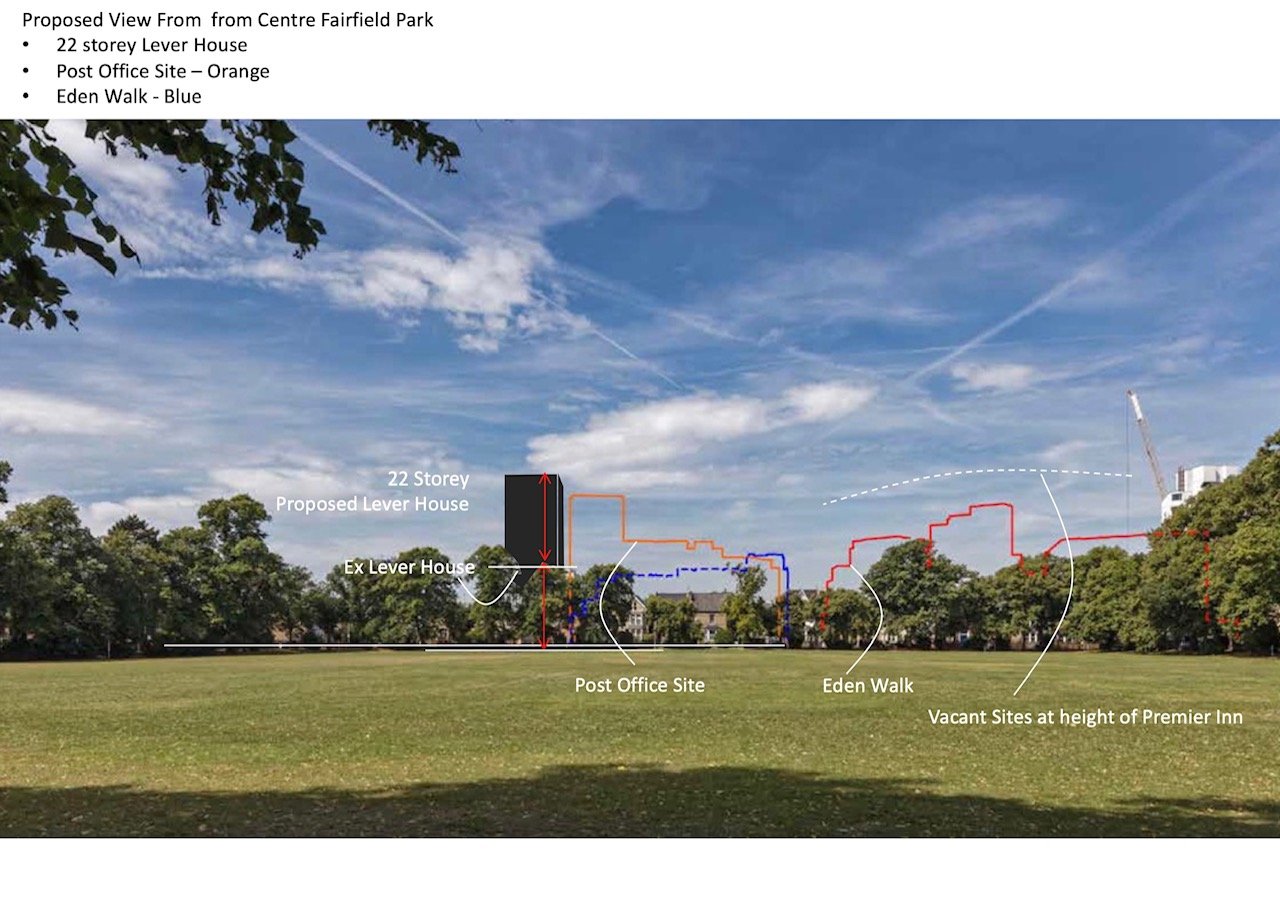 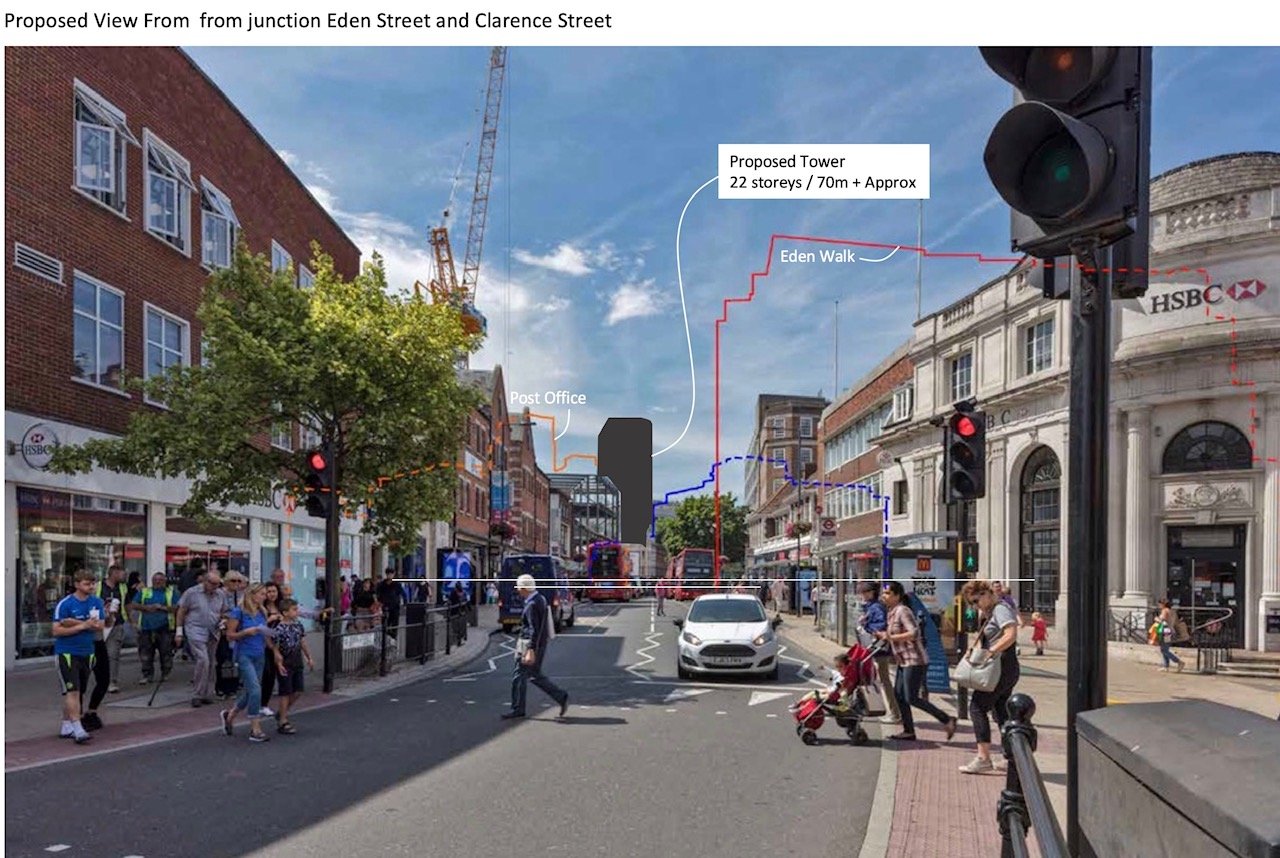 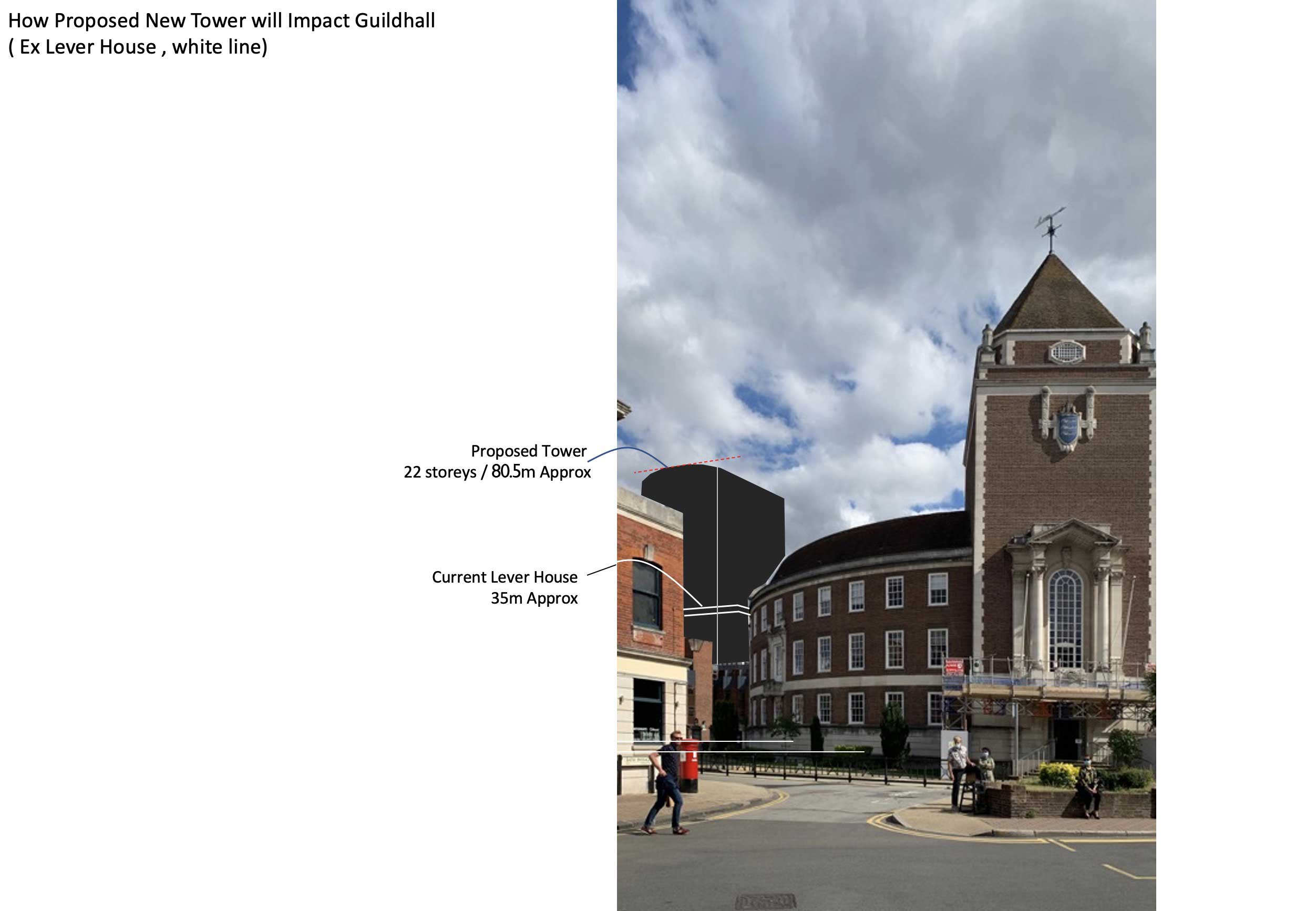