Concern about future of mural artwork 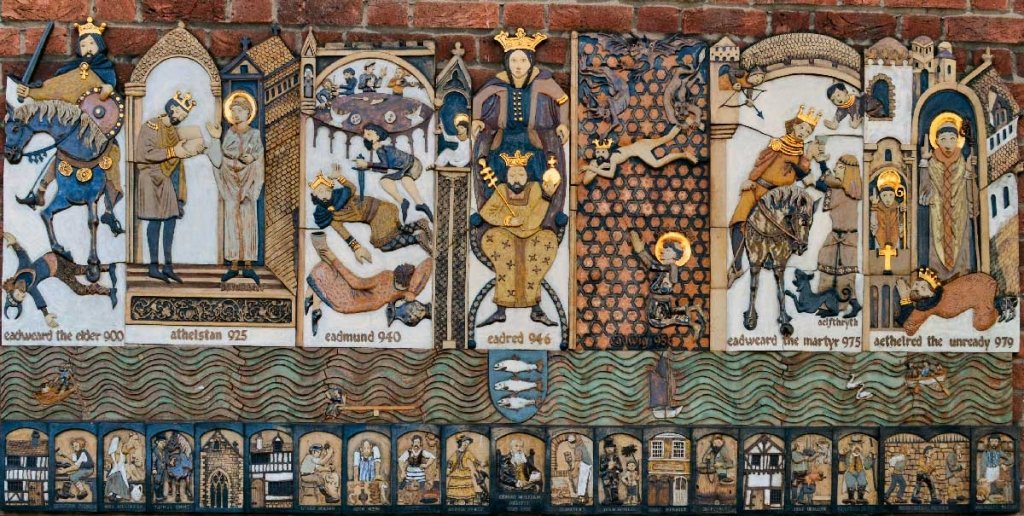 Kingston’s famous mural may face an uncertain future with the development of Eden Walk.

The mural can be found on the outside wall of the old British Home Stores [BHS] building in Eden Street, roughly opposite the Old Post Office. The mural was designed, modelled and installed by Maggie Humphrey, a ceramic artist from North Wales. It is a bas-relief, of 67 main pieces, made in glazed and fired stoneware clay.

Its overall size is 2.75 m by 1.3 m [9 ft by 4.25 ft]. Commissioned by the Royal Borough of Kingston upon Thames, it was unveiled by the Mayor, Councillor Frank Steptoe in November 1985. The top section shows Anglo-Saxon kings, of which two, and possibly seven, were crowned in Kingston. The middle section depicts the River Thames, an important part of Kingston’s history. The bottom panels show some of the buildings and characters of Eden Street, formally Heathen Street, described by George William Aylliffe in 1914, and based on contemporaneous articles in the Surrey Comet. More about two of the residents featured in the mural, John Slawson, a baker, and John Rowles, a chimney sweep, can be found in a history of Eden Street at www.kingstonhistoryresearch.co.uk The mural reminds us that Eden Street once had a much greater population, with far more diverse occupations, than today.

The old BHS building will be demolished in the redevelopment of Eden Walk. While the timescale for this is unclear, already some shops on the site are empty, and it is important that the new Council puts in place some plans carefully to transfer the mural elsewhere in the Royal Borough where it can continue to be enjoyed by the residents and visitors alike. The Old Post Office, currently being refurbished, has been suggested as a suitable place for relocation of the mural.

If you are concerned about the future of this public artwork, which is part of our heritage, please let Councillor Liz Green [Leader of the Council] and Councillor Malcolm Self [portfolio holder for Culture and Heritage] know this. Respectively, their email addresses are Liz.Green@kingston.gov.uk and Malcolm.Self@kingston.gov.uk

I am grateful to Michael Davison for his help in preparing this article.