SERVING KINGSTON FOR MORE THAN 50 YEARS

The Royal Borough of Kingston upon Thames lies on the East bank of the middle stretch of the River Thames. Once in Surrey, it is now in Greater London and lies about 12 miles upstream from Westminster Bridge. In 2007, the population was estimated to be about 160,000 within an area of 37.25km squared. 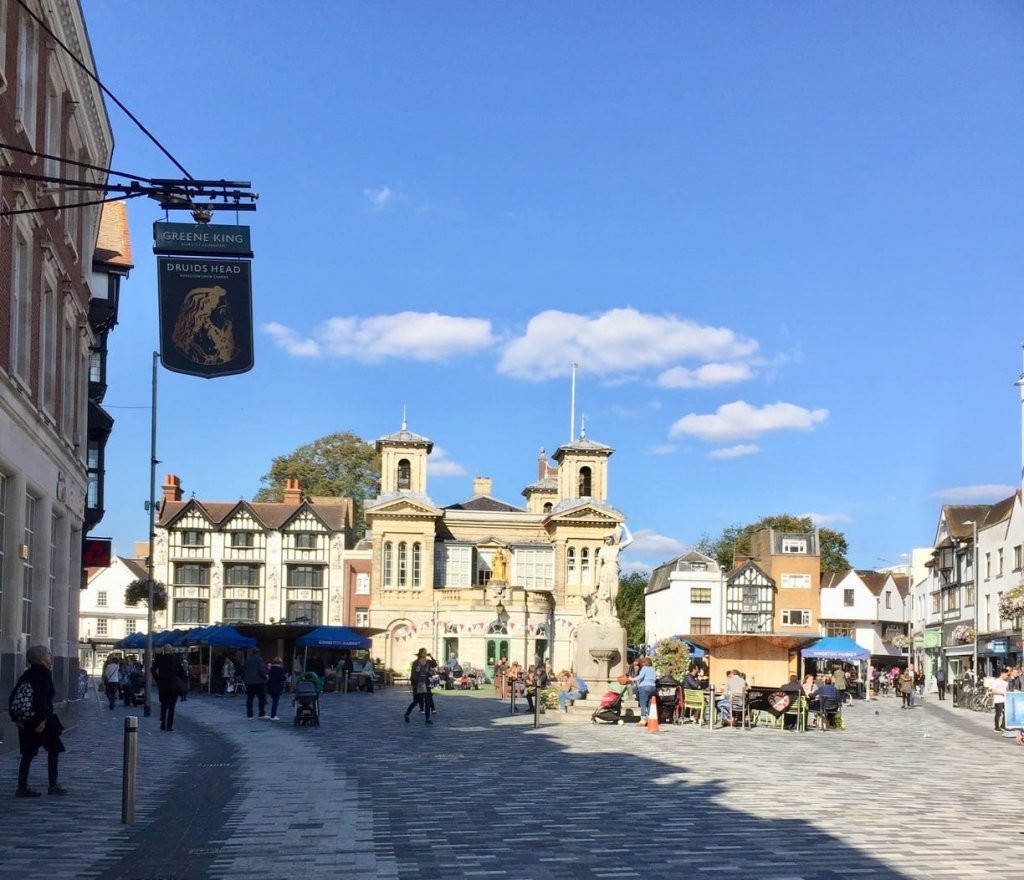 The name Kingston – meaning royal manor (derived from Cyninges Tun or Cingestune) – first appears in an agreement between King Ecgbert and Coelnoth, Archbishop of Canterbury, at a council held there in 838. The Anglo-Saxon Chronicles record that King Athelstan was consecrated there. Tradition has it that Kingston was the coronation place of other Anglo-Saxon kings. Doomsday Book records that Kingston was part of King Edward the Confessor’s farm and that there was there a church, 5 mills and three fisheries.

A Royal Charter was granted to Kingston by King John in 1200. In 1603 James 1 granted the town a Saturday Market and in 1927, King George V confirmed Kingston’s status as a Royal Borough.

In 1965 Queen Elizabeth ll granted another Royal Charter which entitles Kingston to continue to use the title ‘Royal Borough of Kingston upon Thames’.

Kingston’s importance stems from its position on the River Thames. This was an artery for trade and for centuries Kingston Bridge was the first crossing upstream of London Bridge. In the early 18th and 19th Centuries, Kingston was an important staging post for coaches, had leather, brewing and other industries, had markets and was self sufficient for basic goods and services. The railway came to Surbiton in 1838 and a station opened in Kingston in 1863.

Kingston has been an important administrative centre since time immemorial and today it has a Crown Court, County Court and Magistrates’ Court, the headquarters of Surrey County Council, a University and a College of Further Education. While there is virtually no manufacturing industry left in the town, it remains a busy shopping centre with a vibrant night-time economy. The newly-developed Charter Quay area, which archaeologists believe was the centre planned of what became the medieval town of Kingston, is now the home of the recently-opened Rose theatre as well as the river-side housing complex.

Despite considerable development and redevelopment since the Second World War little of any distinction was added in this period and it was an ill-considered plan by Surrey County Council to build a relief road parallel to the river cutting the Town Centre from the artery that brought the town into being that precipitated the formation of the Society in 1961. Opposition to the plan grew amongst architects and residents alike and was finally succesful in defeating the proposal. Since that time the Kingston upon Thames Society has continued to support higher standards of planning and the preservation, protection,development and improvement of features of historic or public interest within the Royal Borough of Kingston upon Thames.

The traffic signs coming into Kingston trumpet the approach of “Historic Market Town” and who can quarrel with that? Kingstonians new and old know we have a market and a market-place and some even know that its primacy locally is protected by a Charter issued by HM Charles ll no less.

Some of us wonder at times whether we are approaching the time when we will have a market-place and no market. Once there was a horse-fair and an apple market; both have long gone.

What are the plans for our Ancient Market? Sometimes when talking to people involved in the Town Centre with its extra funds and staff I wonder if the market is as important to them as I think it should be. German and French Markets come and go, put up their tents but they are transitory. The regular market is there for the long term and should be cherished for it. The constant cry nowadays is a complaint about the anonymity and uniformity of life in our over-crowded islands and in particular about the suburbanization of society generally. Kingston situated so handily for the City and West End is very vulnerable to such criticism – all the more important therefore to fight to retain what makes it special.

German and French Markets come and go, put up their tents but they are transitory. The regular market is there for the long term and should be cherished for it. The constant cry nowadays is a complaint about the anonymity and uniformity of life in our over-crowded islands and in particular about the suburbanization of society generally. 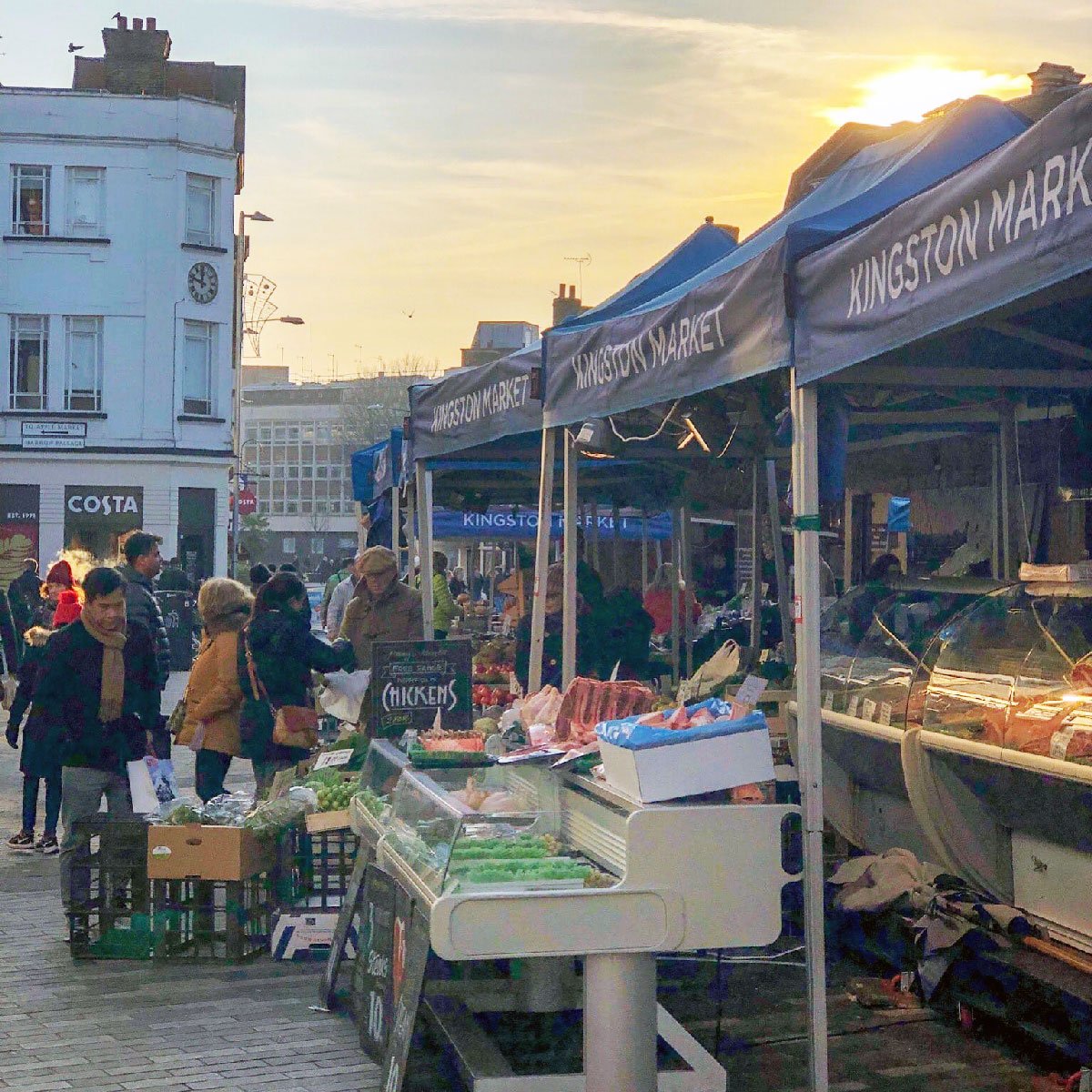 Kingston situated so handily for the City and West End is very vulnerable to such criticism – all the more important therefore to fight to retain what makes it special.

Three things make Kingston special – the river, the bridge and the market. Rightly or wrongly, traders are not convinced that their needs and legitimate concerns receive the attention they deserve. We are told of the need for more retail space, the desirability of more up-to-date office space but rarely, if ever, have I heard about plans to improve the market for its traders and for its customers. Strategies and plans are issued for consultation ( the Society has just received notice of one such consultation about GREENWAYS) but nothing specific to the Market. The townscape of the market-place and the Market House is superb but it is more than a pretty picture on a post-card. It is a commercial centre which needs to be cared for and cherished. Do the people with power and influence in Kingston feel this too? That is the question.

Help us make the future

The work of the Society is vital to safeguard the best interests of the Borough – we need all the help we can get – join us!