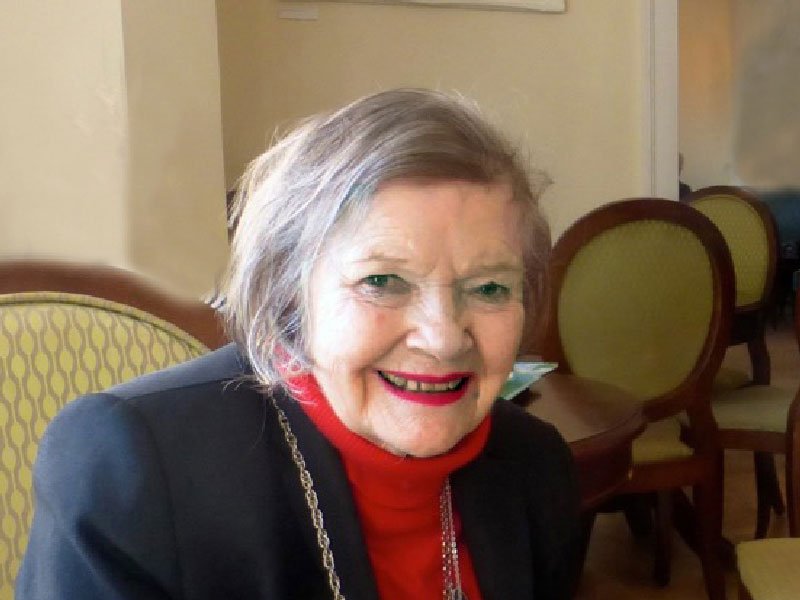 If the Kingston Society was founded to ‘preserve, develop and improve’ the quality of our borough, then nobody has been a more stalwart proponent of its aims than June Sampson. Making her home in Kingston in 1970, June quickly espoused the causes of the Society, and resolved, in her own words, ‘to become as active on its behalf as a baby, a toddler and a new house would allow’.

Nearly 50 years later, and with a shelf of local history books to her credit, June Sampson’s mind is still buzzing with the topics she would be writing about today had her dreadful road accident five years ago not put an end to her journalistic activity. As well as her books this included countless articles during 35 years on the Surrey Comet that have entertained as much as they have informed.

When we met recently for morning coffee at Pembroke Lodge in Richmond Park, it was borne in upon me how much that accident, a personal tragedy for June, has cost Kingston in terms of unwritten or uncompleted tales of local history. ‘There are always new things coming to light, new stories to be told’, June said. ‘I only wish I could still do it’.

Our unsung heroes, for instance: ‘We don’t we give more recognition to John Williams? People are building on green spaces all over England, so doesn’t Williams deserve a plaque for saving the Fairfield as a recreation area for the people of Kingston, largely at his own expense, fighting local apathy and even opposition to do so?’  And what about Thomas Hansard ? Everyone knows the name of Hansard as the official chronicle of the proceedings of Parliament. ‘But how many know that the reporter who originated it lived in Ashdown Road, Kingston most of his life, choosing the town because of his passion for fishing?’

When it comes to plaques, ‘what about a plaque on the Pret a Manger café in the Market Place? It’s a historic building, with exposed roof timbers, and it was once the Queen’s Head inn whose landlady was the last person in Kingston to suffer the indignity of the ducking stool after being sentenced as a common scold’.

Perhaps we need a plaque, too, on the front of the Market House to identify the monarch depicted in the statue on the balcony above. ‘Lots of people seem to assume it shows Queen Victoria, but No, it’s Anne’, says June. ‘A lifelike statue, too, it was made in her lifetime’. Anne, it seems, was popular in Kingston and lived at Hampton Court, where some of the scenes in the new film about the queen were made.

In Armistice anniversary year, asks June, ‘why weren’t we saying more about Field Marshal Haig, Army Commander on the Western Front – and a Kingston man?’  Vilified by many because of the huge death toll, Haig was a hero to Kingstonians. An official reception planned for his return from the war was cancelled because an exhausted Haig preferred a quiet welcome to Eastcott, his home on Kingston Hill. ‘But workers at the Sopwith factory insisted on marching to Eastcott and singing “For He’s a Jolly Good Fellow’’.  Seven months later Kingston made Haig a Freeman of the Royal Borough. Eastcott no longer stands, but Haig’s name remains on Coombe Wood Golf Club’s list of captains.

As for the Second World War, what about Ian Bazalgette ? ‘All right, he has a road named after him in New Malden, but how many people know the full story of how this brave Kingstonian came to be awarded the VC?’ It was sadly a posthumous award, as Ian died after struggling to land his plane and save his crew after an ill-fated daylight raid on a key depot in France in 1944.

When to comes to road names, there are many stories June would like to tell. Do people know that Fife Road is named after a market gardener from Fife in Scotland who owned the site? ‘He gave his two unmarried daughters a house at the Clarence Street end of Fife Road and immortalised them by inscribing the words ‘The Sisters’ on the wall’. (After leaving June I went to check if the words are still there. They are!)

June is particularly sensitive about road names, having suffered herself from a developer’s whim in giving the name of Blenheim Gardens to the road in which she lives with her husband Hilton Tims, himself a former Cometjournalist and acclaimed biographer. ‘Our estate was supposed to be called Forsyte Park, very appropriate as leading off Galsworthy Road. But the developers thought it would make their properties sound posh if they called them after English stately homes, so Blenheim Gardens it became. And don’t start me talking about the absurd Sury Basin . . .’

A lover of Kingston since she first arrived here from her native Bristol, June keeps a close eye on what is going on in the town today – sometimes with dismay. ‘I’m fed up with high-rise buildings. Why do we have to have so many monsters, quite out of scale with our historic market town?’ The rise of on-line shopping concerns June, as sounding the death knell of smaller shops. ‘If this goes on will we end up leaving a Clarence Street with no shops ?’

THERE MUST BE NO LET-UP IN THE SOCIETY’S VIGILANCE

June is full of praise for what the Kingston Society has achieved over the years in monitoring development in Kingston, ever since its very first success in the 1960s in fighting a plan for a ring road that would girdle the town centre and cut it off from the Thames. But she insists there must be no let-up in the Society’s vigilance today, and it can’t be left to the older members who have carried the flag for all these years. ‘We must find younger people to take enough interest in their surroundings to want to bequeath to their children a town that remains worthy of its past’.

As one who started writing at the age of 11, in a church magazine in Bristol, and who started her journalistic career at a time when it was regarded as an inappropriate and even dangerous pursuit for a woman, it distresses June, at 85, that she can no longer pursue what she regards as ‘the best job in the world’.

It distresses, too, all those who for so long delighted in hanging on her words. But we have some consolation in the archive of painstakingly researched and consummately crafted written material she has given us, and in the friendship so many members have, like me, enjoyed with her over the years.