We have two independent speakers with a common theme: England’s first King,  Æthelstan, proposing a new history centre and statue. Martin Ellis will talk about the benefits of a new cultural centre and Alan Birkenshaw has a fascinating idea for a compelling sculpture as a centre piece.

Kingston has a fine library and museum, built through philanthropy at the very beginning of the 20th century. Kingston plans to replace the Kingfisher Leisure Centre on that same municipal site. What an opportunity. Build the leisure centre but complement it with a King Æthelstan Visitor Centre, a local history centre, and a covered public space joining the new centres in a museum, library and leisure complex with shared facilities like toilets and cafes.

Just as the King Richard III Centre in Leicester celebrates a local king and provides a focus for a renewed emphasis on heritage to regenerate Leicester, so a new King Æthelstan Visitor Centre would celebrate the unique Saxon heritage of Kingston, highlighting King Æthelstan, in particular, and the part he played in shaping our country at a time when there was disunity, civil strife, and invasion.

The Museum is already too small. It is a world leading site for Muybridge artefacts and the Marsh collection of ceramics, as well as an art gallery with pictures of historic import (e.g. the Brill collection which gives a prize each year for three paintings recording an area of Kingston likely to change or disappear). Important areas of Kingston’s history cannot be found space (e.g. history of the Hawker Hunter built in Kingston).

This development could create a heritage hub in Kingston. By seeing Kingston as a centre from which people can access so much of our cultural past – Dorich House, Hampton Court, Kew Gardens, Marble Hill and Syon Houses, London’s plethora of museums, galleries such as G.F. Watts Gallery or Dulwich Gallery, and plenty more – Kingston becomes a honey-trap for heritage tourism.

To make this vision come alive, it needs the full support of the Council in submitting a bid to the Heritage Lottery Fund and linking it in with the development of the new leisure centre. It will also need all stakeholders – political parties, Friends of the Museum, Kingston Society, Kingston University and many others – to show their commitment. And the reward is a heritage hub that attracts visitors to Kingston, its hotels and places to stay, its restaurants, its shops, and its theatre. 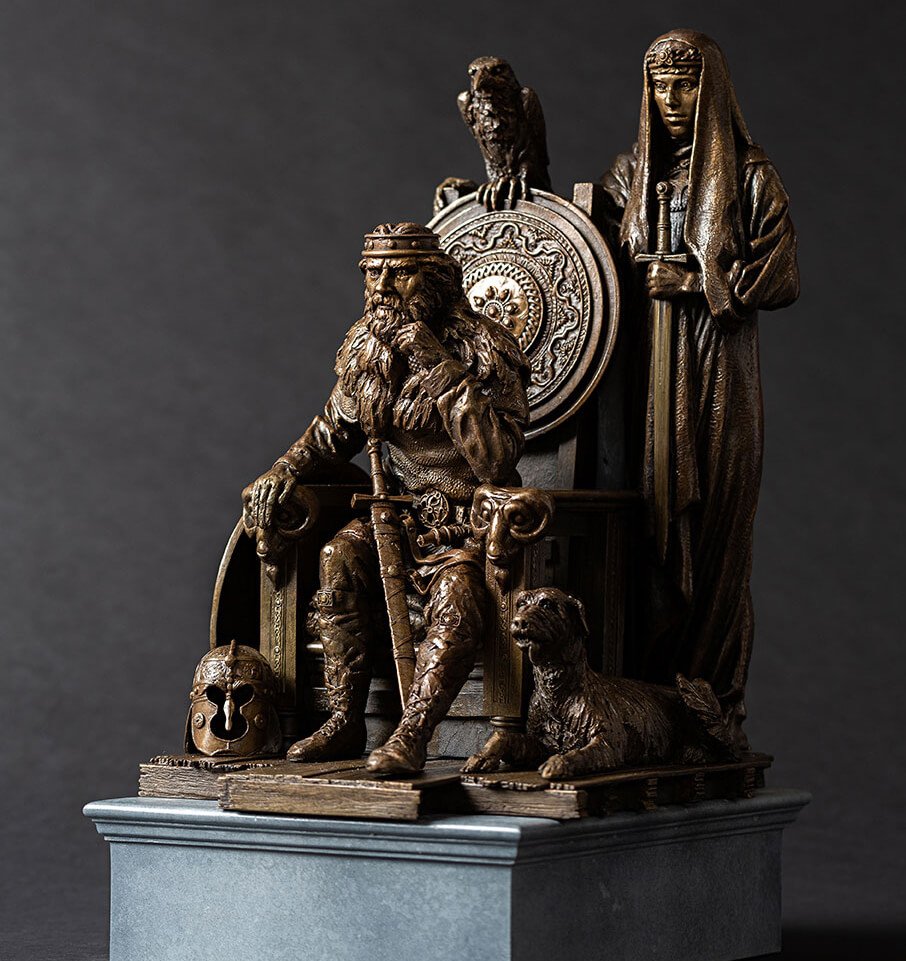 THE IMPORTANCE OF KING ÆTHELSTAN

Æthelstan was a powerful warrior king described at the time as ‘God’s Warrior’ who was set over the English to lead His people, supported by God to victory in war and peace.’ King Æthelstan – Grandson of Alfred the Great was born 894  and died in  939 Aged 45.

When Æthelstan’s father, Edward the Elder died, Æthelstan was crowned king of Wessex and Mercia. The ceremony took place on September the 5th, 925 in the Market Place of Kingston upon Thames. That crowning ceremony on the Coronation Stone lays the foundation for the claim that ‘Kingston is where England begun’.

Æthelstan’s achievements as king were extraordinary. He oversaw the translation of the bible into English. He established a formal organization for masons which led to Freemasonry in England. He granted many charters (think of Presidential Executive Orders) which enabled towns and boroughs to trade effectively.

Behind Æthelstan sits Muninn, the Norse god Odin’s raven, mythical in culture, but physical in this work of art, encouraging the mind to question his presence. Next to Muninn is the ‘spirit’ of Æthelflæd – warrior queen of Mercia in the preceding years, daughter of King Alfred, and aunt to Æthelstan.

(We say spirit because at the time of Æthelstan’s reign, Æthelflæd was no longer alive. But coupled with the mythology of the Norse gods, and Odin’s raven, the influence of Æthelflæd was an integral part in the development of Æthelstan, as it was she who brought him up and taught him the art of warfare and kingsmanship.)

It will encourage education and knowledge, which will inspire tourism, commerce and diversity – thus placing Kingston on Thames firmly in the history books and tourist maps, as an extremely important place to visit in modern day England.

Coming to our public meetings

Unless otherwise noted, all our meetings are held in the Judge Lecture Theatre, Tiffin School, Kingston upon Thames KT2 6RL. Click here to see a map of the area.

Access is from the London Road entrance where there is free parking available, subject to other events happening at the school. There are bus stops outside and opposite the school entrance, and the main bus and railway stations are within short walking distance. The Judge Lecture Theatre is accessed through the main doors next to the new circular school cafeteria. It is on the ground floor and we believe you will find it accessible.

Free admission for members of the Society. Members of the public are very welcome to attend and are asked to pay £2 toward our costs, alternatively they can join the Society on the night for just £10.