Here follows our feedback on the Draft SPD for Kingston Riverside, on behalf of the Kingston upon Thames Society.

An excessive amount of fishing platforms is shown in Canbury Gardens. We question if there should be any as they are likely to interfere with the enjoyment of other residents and visitors who wish to walk alongside the riverbank.

There is serious concern about the amount of shared cycle-ways with pedestrians in Canbury Gardens. It can be quite dangerous for pedestrians who are unaware that a cyclist is moving near them. If there could be some designated space set aside specifically for cyclists next to the river and not elsewhere in the park, this would be sensible thus allowing the rest of the Gardens to be calmer in nature, and not therefore not so dangerous.

Canbury Gardens has never been a “formally laid out public park” as described in the consultation document. Instead its informality helps create a pleasant open space to relax. “Formal” and “relax” don’t go together.

We don’t think that the band stand should be moved. There is absolutely no need to do this. It has been a valuable addition to the park and is enjoyed by the many hundreds of visitors and residents every Summer, so it should remain in its current position.

Some of the planting alongside the riverside need to be refreshed. Thought and funding needs to go into ongoing maintenance.

Too much is left open to interpretation. E.g. what are classed as “non essential activities” ?

We need to protect some of the characterful old buildings along the river, which could be under threat with the desire to maximise commercial, leisure and recreation etc. Suggesting that maximisation is good will only encourage developers to make unwanted and unnecessary applications for yet more new development.

We also need to keep free-to-use open spaces and seating such as the area to the south of the Ram Pub, and where possible to create more but not by developers demolishing existing properties many of which are part of the town’s heritage stock.

“Turks Boats” either should not be here, or should be condensed to half its current footprint. At present they occupy an area considerably bigger that can be justified and they are not an attractive asset to the area.

Reinstating the Foot ferry crossing to complete a circular walk sounds a good idea. This would be a sensible attraction for residents and visitors alike.

The present character of this area benefits from calm views of the river, and visual separation from the Portsmouth Road. We fail to see how suggesting in this document that more could be crammed in without it being seriously detrimental to it peaceful character.

We don’t support additional moorings in this area which is completely be at odds with the character of the Promenade.

Lastly, the Society agrees with the concerns written by Commodore of Minima Yacht Club: in that there should be a 6th theme as part of the new SPD , reflecting the principles of the adopted National and London Planning Policy Frameworks as they specifically apply to Kingston:

The Society entirely agrees with the Commodore in his concerns that there must any erosion of the river itself.

But in addition the Society would add “that the Borough must not allow erosion by developers or other organisations” of the Borough’s greatest natural asset, the River Thames itself. 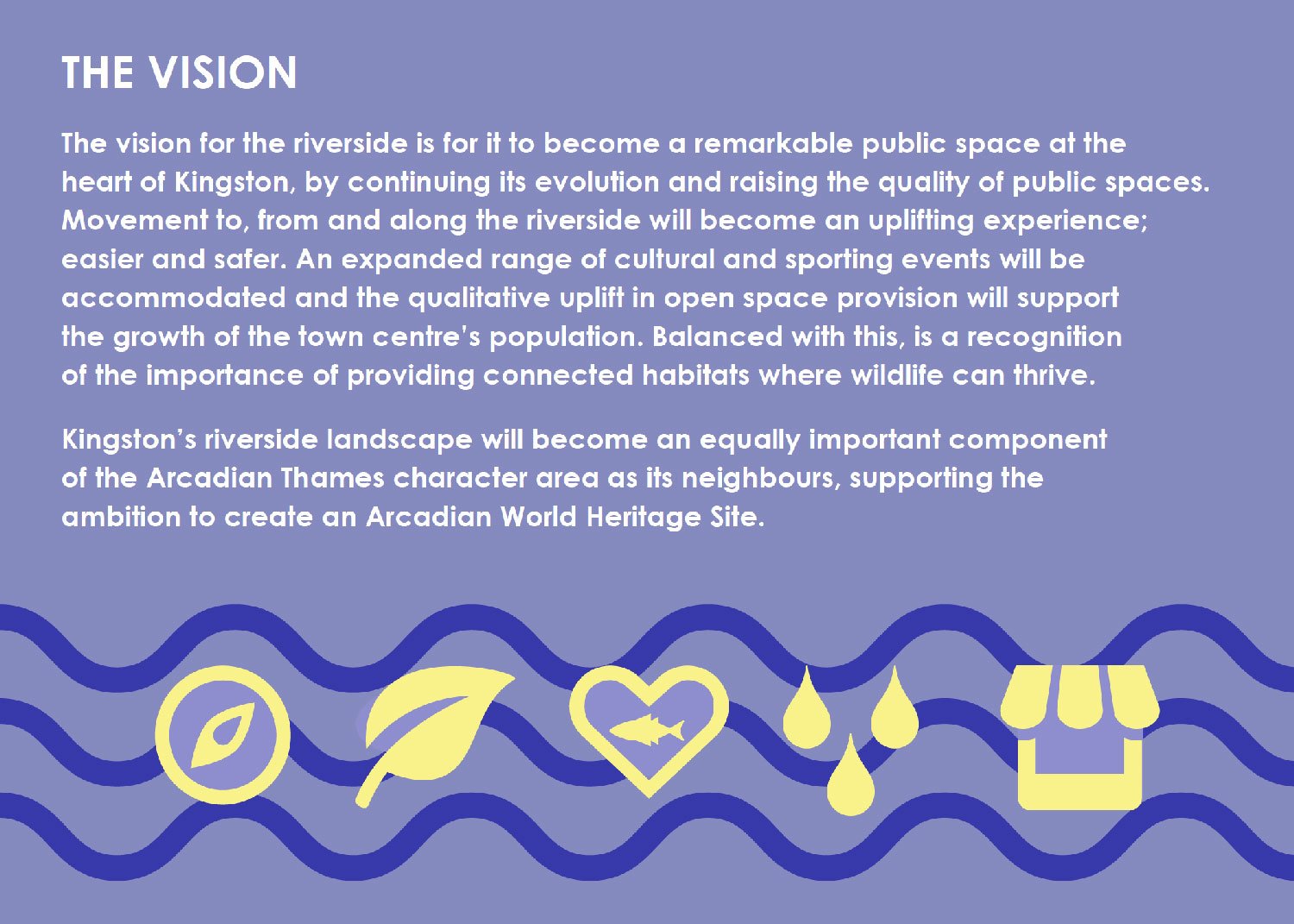