The developers RER bravely came to our first public meeting for 18 months to reveal their developing plans for the former Surrey County Hall. ‘Bravely’ because they had a rather boisterous audience, some clearly angry at both the proposals themselves and the lack of notice for and the timing of the public exhibition.

The second consultation proposals are available to view on-line at the project website www.formersurreycchq.co.uk (or you can access the exhibition boards here if that link stops working) along with a link for feedback. The deadline for feedback to be submitted was 10th November. It is clear despite our earlier feedback the developers intend to press on with entirely inappropriate tall buildings directly adjacent to the front of County Hall and to the gardens in Woodbines Avenue and Milner Road but we are pleased the plan for ‘pods’ (houses, the rest of us call them!) on the grade 11* listed cobbles on Milner Road have been scrapped.

Here is our detailed feedback:

Introduction: The Kingston Society, affiliated to Civic Voice, represents residents in the Royal Borough of Kingston upon Thames. The Society is established for the public benefit in part to (i) promote high standards of environmental design, planning and architecture and (ii) to secure the preservation, protection, development and enhancement of features of historic or public interest.

This response is submitted by The Kingston Society (KS) following committee discussions in response to the presentation made to us and the subsequent public exhibition of development proposals for the County Hall site by the developers RER and their team on 21st – 22nd October 2021.

We thank you for making the presentation at our KS meeting and the opportunity to respond to your proposals that have been presented through this latest round of engagement.

Feedback: We would preface our remarks with these observations:

We are happy to see the notion of ‘pavilions’ on Milner Road have been dropped. An obvious sacrificial element that would have achieved nothing except to degrade the façade of the rear of the building.

We are pleased to see the emerging commercial/public use proposed through The Trampery managed workspace and your commitment to endorsing community use of those historic assets.

We too are keen to see educational uses, civic uses, and community uses that bring public benefit from County Hall, that RER bought in the full knowledge that its listing is as much about its former civic/community function as it is about its architectural qualities.

We understand it may be for commercial sensitivity reasons but it was notable that RER were silent on discussions with Kingston University, and indeed silent on whether there is a realistic expectation to see the usage changed from civic / educational to residential or whether you have pursued your obligation to find alternative educational or civic uses.

We are most unimpressed by your 8, 6, 4 and 2 storey proposals for the Surrey Club site and the former tennis courts. And very disappointed that such a key element was so poorly explained by the available plans and CGI. For the reasons that we set out below we expect to see this scaled back to the existing building footprint and for considerably more thought for the design of the new buildings here.

It has been made clear to us that local residents consider your proposals to be of poor design and to fail to respond appropriately to the context particularly in terms of height/mass/design, separation and amenity – in short we see your proposals for this part of the site as being egregious over-development and would certainly not create well designed homes nor create the type of locality where residents old and new would find the quiet enjoyment we all want from our homes.

Height and massing: We take issue with the massing and appearance of the new build for the Surrey Club site both in Penrhyn Road adjacent to SCH and to the residential homes that it meets to the south and west. We fail to see how it could be considered as being in a location appropriate for a tall building:

London Plan Policy D9 /Tall Buildings/Impacts
d) proposals should take account of, and avoid harm to, the significance of London’s heritage assets and their settings. Proposals resulting in harm will require clear and convincing justification, demonstrating that alternatives have been explored and that there are clear public benefits that outweigh that harm. The buildings should positively contribute to the character of the area.

We did not hear any justification for the harms, nor indeed any benefits for the public.

Design: Good design in locations such as this is about exemplar architecture and sensitive transition, and not about having high rise high density development abutting the boundaries of listed buildings and the existing homes. Such an approach cannot be considered sensitive transition.

The details presented of the Surrey Club replacement lacked an explanation of the design evolution. Contradictory presentation muddled whether there is one building or three, whereas from the illustration of the south elevation facing SCH it is clearly one large building. You identified the Town House as a benchmark for the building you would like to build here but we are certain that you are some way from this. Currently you offer nothing other than the ‘New London Vernacular’. There is a real opportunity to build something special in this sensitive location and building with reconstituted stone is not all that is required.

We recommend consideration of a charrette, or community co-design to generate some genuine creativity .We acknowledge that designing buildings in this part of the site is complex and demanding. It is the centuries’ old challenge of making old and new work together. We consider there is still a long way to go before Kingston’s largest and arguably best Grade ll* listed asset is complemented by new buildings of commensurate quality. This year’s Stirling Prize winner nearly opposite has set the standard you should be aspiring towards. The Society would like to see an equally well-designed building as the new neighbour to County Hall.

We believe that the separation distance frontage to frontage between the Grade ll* Listed Building and the new buildings on the Surrey Club / tennis courts would be about 10 metres. This would be contrary to both Kingston and the Mayor of London’s minimum standards for visual separation as set out in their Housing SPG /Design SPD. For that reason, your proposal is unacceptable.

We do not believe that a residential scheme such as you propose would meet the wholly exceptional circumstances required to justify the substantial harm that would be caused to the setting of this Grade ll* building.

In summing up on your proposals for Surrey Club site we consider our concerns to be fundamental issues that cannot be overcome by design changes to a proposal for dense development on this site. These issues that you have not addressed require a fundamental rethink about the Surrey club / tennis courts site. Added to which we are told there is a restrictive covenant that the Milner and Woodbines residents fully intend to enforce to protect their assets.

We are pleased to see considered thinking for this building and welcome your ideas to create a stand-alone budling that inserts breathing space into gap between the oldest part of the site and the newest. But at ground level what is the germ of a well-considered building becomes gratingly disconnected with the building design in an ill-conceived attempt to make a colonnade. We find the additional height of the roof, caused we understood, solely by the need to hide the air source heat pump plant, far from elegant and overbearing. If it is unavoidable we would suggest cladding it in a lighter coloured material so that it is less obtrusive. The use of (reconstituted) stone is a good nod to the construction of the historic asset but should not be allowed to diminish the need for brave and excellent architecture that resonates with the smaller of the courtyards and its historic asset.

We welcome the inclusion of air source heat pumps, the overall landscaping proposals, reuse of materials, plentiful cycle storage and reduced car parking spaces. However, we note a lack of declared BREEAM standards for the new build elements and would welcome an aspiration of ‘outstanding’. Nor is there mention of rain water harvesting which would make an additional green contribution.

We feel the plans to turn houses at 5 and 7 Milner Road into one bedroom flats runs counter to the local plan which wishes to retain family houses with gardens as there is a shortage of these in the town centre. Please refer to Policies DM14 and KT1 of the Core Strategy that seek to protect dwellings such as 5-7, dwellings that are suitable to provide the small to medium sized family housing needed particularly in the Kingston Town neighbourhood.

We feel whilst there is as much to like about your proposals, there is considerable room for improvement for the new build elements. Your thoughts on greening and sustainability are mature and welcome, though we would welcome your commitment to the highest BREEAM standards.

You have demonstrated a willingness to provide high quality public assets in the parts of the building you are obliged not to change and we look forward to hearing about these ideas as they mature.

We are concerned that the computer wing replacement is not sufficiently sophisticated nor creative in its need to interface with the oldest part of SCH.

We are majorly concerned with every aspect of your proposals for the social club and adjoining land which we cannot support. Your plans risk damaging the main historic building front and side elevations and irreparably diminishing the quality of life for some residents in Woodbines Avenue and Milner Road.

That said, we do appreciate being consulted, and stand ready to help improve the design proposals in so far as we can. 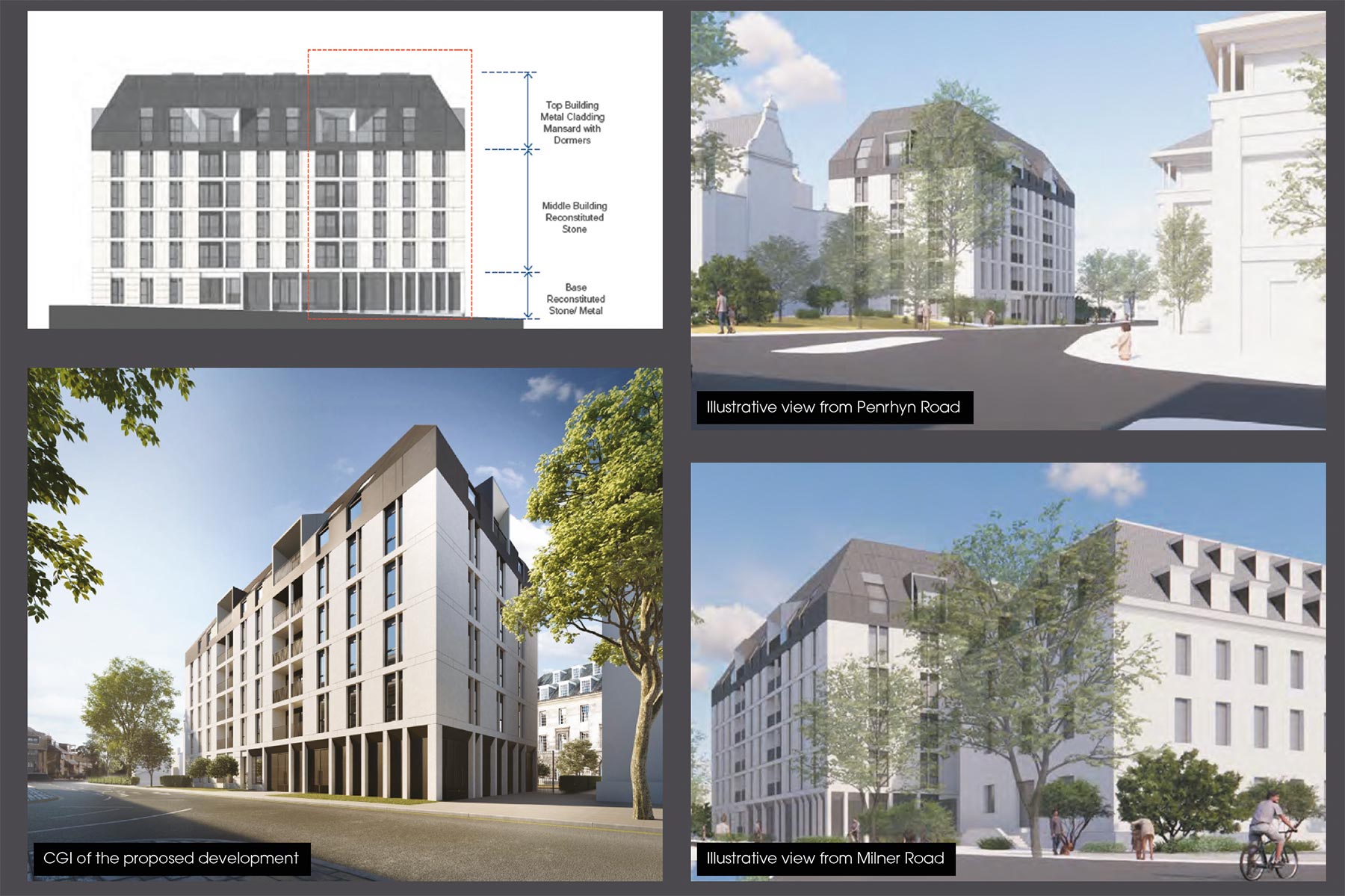 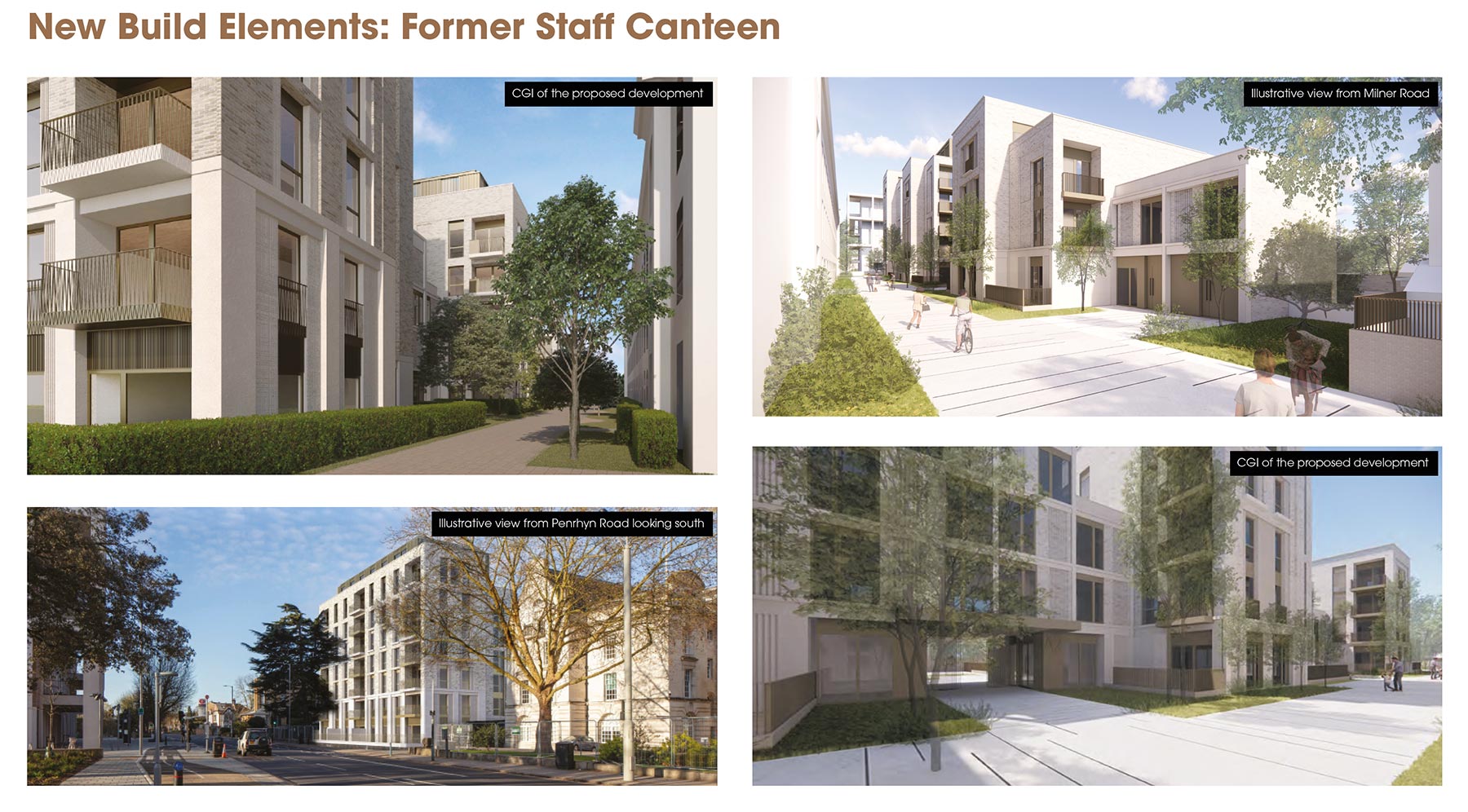