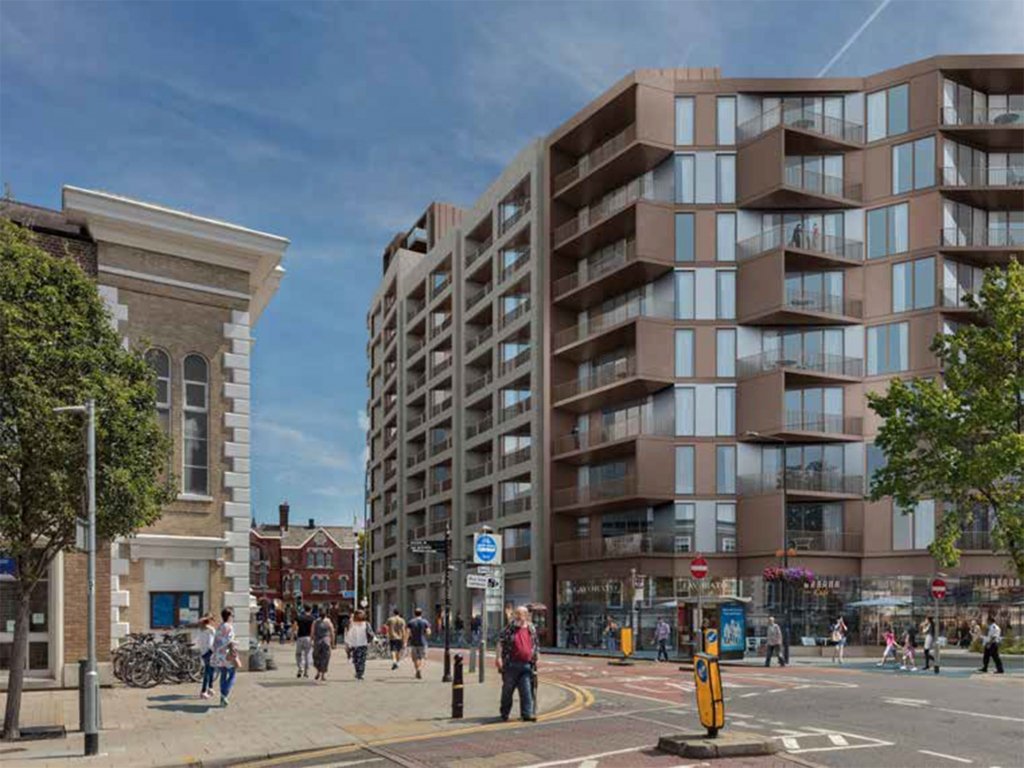 We attended presentations on this scheme in July, November and January. The following is our updated response based on what have seen and been told.

Having had a further opportunity to look at the revised plans by the developer, we had hoped that this proposed development might have been modified after they received a lot of public criticism & therefore have altered to be more modest and act as a “transition” from the low rise historic Market Place which contains many Listed buildings & is predominantly 2/3 storeys in height.The Market Place can rightly be called a ‘heritage asset’ in the terms used by Historic England in their recent guidance document* & within the terms of the latest NPPF. Indeed in page 61 of the Design Statement the developers state that their aim is to “create a softer northwestern corner, of a smaller scale and of a more fragmented form, to relate to its historic small grained context.” This is simply has not been  achieved with the massive block face that now presents itself to the NW corner, as can clearly be seen in the DS illustration.

We believe this scale and massing harms & damages the setting of the Grade 2 listed United Reformed Church opposite which is again a ‘heritage asset’ .
At the NE corner some kind of ‘landmark’ or ‘statement’ is proposed on the corner of Brook & Eden Streets, which the applicant has bizarrely  interpreted as a reason to build a tower of 12 storeys. Yet there is no approved design guidance to suggest any such thing – neither is it supported in the RBK Area Action Plan nor the RBK EQ SPD.Nor would Historic England be inclined to agree to this height. Where is the logic or justification behind this? The Society is very concerned about the further deterioration of the setting of the Old Post Office. This tower would seriously harm & sustain damage to the setting of this historic asset. 12 storeys is far above the 6-8 storeys guidance in the EQ SPD for this site.

The idea of a professionally ‘rented’ model – instead of individual ownership of the flats- is an interesting concept & we very much hope that the ‘discounted rent’ flats [peppered throughout] would be sufficient, trackable, and the arrangement enduring if they were to be the only form of affordable accommodation in this development. It remains to be seen whether these will be at a proper “discount” which could & should be secured through a totally binding legal Agreement.

The Society notes with some regret the loss of the large, 1000 plus person live music venue [the Hippodrome] resulting from this scheme.

We know of no other comparable venue in the Borough so its loss will be a significant blow to  Kingstons cultural offering. Despite the recent Growth Committee agreeing a new Cultural Strategy -which appears to encourage the performance of all types of music amongst many other types of culture- there is nowhere that such a venue is currently available, or even in the planning stage, & the DC Committee should take this into account when deciding this Application.
Ironically many of the proposed residents could & might especially appreciate such a venue as part of the wider cultural scene. The developer is making a small conciliatory action by slightly extending the stay of the Hippodrome venue on the site, but we don’t think it is enough.
We also note changes to the multi storey car park building on Brook Street are now included which may improve its current hideous appearance.However the proposal for some sort of “living garden wall” will only work provided that it is properly maintained on a very regular basis with sensible watering etc. Therefore this may only amount to  temporary ‘window dressing’, rather than a lasting solution.

The applicant has chamfered the building line at both corners of Eden St, giving slightly more space to the historic assets opposite & nearby, and slightly better circulation nodes in the public realm, particularly at the western corner. However we were told that the building line along Eden St is only set back about half a metre, which is a great deal less than what we expect as is indicated in the EQ SPD. Contrast this with the permitted Old Post Office scheme, and with the recent Canbury Business Park application where each is set back by about 2 metres. The pedestrian space along Eden Street is not sufficient for the quantum of additional residents who will at some point want to leave their rented flats and go for a walk.

We expected Eden Street to be widened enough to form a “Square” as has been mentioned both by the developers & RBK [in the past]with a full uninterrupted view of the Old Post Office at its east end, as indicated in the EQ SPD, not just as seen from the United Reformed Church angle as they have pictured. They cannot truthfully say they are giving “clear views of the Old Post office along Eden Street”, nor are they “allowing for the creation of Eden Square” as they claim. The guidance of the EQ SPD is completely clear & is therefore NOT being met. We are also concerned about a ‘canyon like’ effect being created on Eden Street.

The public realm at the Brook Street corner would be more effective were it not compromised by the columns and the new building towering above. As such it is not all in the public realm. The corner of the building above is slightly more open now that it is formed from balconies, but we would prefer to see it chamfered rather than the pointed corners at this corner which we consider have a jarring effect.

The elevational treatments appear have shown some promise. The articulation of the frames and the constrained pallet of materials will, as far as we can tell, avoid the monolithic and kaleidoscopic materiality problems of the nearby permitted Eden Walk scheme opposite.

We hope the choice of paving in the public realm should be very carefully considered, and could be more sympathetic and practical than the poor choice of granite used in the Ancient Market Place ( which the applicant  incorrectly referred to as the “Market Square” ).

The once planned ‘through route’ to the rear of the site is now lost, reducing the permeability if the site, which is a lost opportunity & to be deplored.
We observed that the design does not include Office space nor a medical centre which, in contrast, were both included in CNM’s Canbury Business Park withdrawn proposal. So there are no planned social or community contributions for new residents in this development. Anything of this sort will have to be sought via CIL contributions which should be high on any list of negotiated requirements.

This proposal fails on :
Excessive height and impenetrable massing which is both damaging & harmful to the settings of the two grade 2 listed assets close by,to the Market Place close by, and incompatible with the Council’s approved Area Plan and SPD.

Improvements to the public realm will be much needed to support the greater numbers of residents and visitors which this development would add to as well as those living in the TOPO & Eden Walk schemes . The proposed public realm improvements are completely insufficient & lacking.

We find this scheme seriously fails on all of the above points and it will neither support nor enhance the the character of Kingston, its heritage and its walkable streets.

Historic England have recently produced a very comprehensive document for guiding any development decisions that the RBK Council is considering when Applications are submitted. It is regrettable that they did not print this before the TOPO & Eden Walk schemes were considered & approved by the Council.