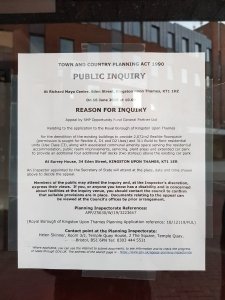 The developers of the Surrey House site, 34 Eden Street, Kingston-upon-Thames appealed against RBK earlier this year. The Inquiry was held on 18-21 and 25-28 June 2019 at the United Reformed Church across the road from the proposal site. We have consistently raised our objections throughout the consultations and David Kennedy represented us in person at the Inquiry. The inspector has now concluded that “The appeal is dismissed and planning permission is refused.”

This case is a real turning point & a great encouragement in our fight to protect our heritage. Of particular note in the Inspectors report, reference is made to recent planning case law:

Factors against the scheme included lack of a set-back on Eden Street; height, mass and scale of the building and the inadequacy of the proposed public space; inadequate provision for family housing & failure to provide the maximum reasonable amount of affordable housing.

But it was the weight given to harm to designated heritage assets in the light of recent case law that had a great bearing on the decision.

The proposed development would affect the settings of the following heritage assets: the Old Post Office and URC Grade II listed buildings which lie opposite the site’s main frontages; the Kingston Old Town CA to the immediate west of the site; the Grade II listed Guildhall and the Grade I listed Clattern Bridge and Coronation Stone, located within the Kingston Old Town CA to the west of the appeal site and in the context of which the proposed building would be seen in views to the east; the Grade II listed Market House together with a number of listed and unlisted buildings of townscape merit on the east side of Market Place, from where the appeal scheme would be visible above their rooflines in views to the east; and a number of non-designated heritage asset buildings along Eden Street, framing views at the entrance to the Kingston Old Town CA, Market Place and Apple Market, which the proposed development would be seen within.

In the inspectors assessment, the less than substantial harm to heritage assets outweighed the public benefits:

“Paragraph 193 of the Framework establishes that when considering the impact of a proposed development on the significance of a designated heritage asset, great weight should be given to the asset’s conservation, irrespective of whether the potential harm amounts to less than substantial harm. In this case, the significance of multiple heritage assets would be harmed. In the light of this, the statutory duty to have special regard to the desirability of preserving the setting of listed buildings and the contribution of the affected heritage assets to the quality and character of Kingston, I attach considerable importance and great weight to the harm to each designated heritage asset which would result”

“The harm to the designated heritage assets would not be outweighed by the public benefits of the proposal.. [therefore]… the appeal proposal does not benefit from a presumption in favour of sustainable development.” He concluded: “For the reasons given above, and taking account of all other matters raised, I conclude that the appeal should be dismissed and planning permission refused”