The Kingston Society was founded in 1962 and sets, in part, its responsibility to:

We find broad support for the concept as a whole but not in some of the detail, in particular the mundane elevation on the riverfront and the massing in South Lane. We acknowledge the evidence of considerable and considered analysis in the layout, amenity, access and sustainability aspects of the proposals.

This is a difficult site, both in shape and size and we are impressed that a surprising amount of amenity space has been included as well as efforts to maximise light within the properties which all have dual aspect. The interior courtyard, although small will do much to mitigate the lack of private outside amenity space for residents. We raise a concern about the potential loss of light to the residents in South Lane despite the Sunlight report, but accept there is an improvement to light for the residents for the properties to the north of the site. Cycle storage, vehicle access and resident and commercial access all work well.

The Society felt that GM had been reasonably approachable in their two rounds of public consultation but that typically the developers failed to recognise that early involvement of the community benefits everyone. It is exasperating and unproductive that the Design Review Panel does not include community members. All the current planning policy points towards co-design and community established design codes.

Whilst fundamentally questioning the need to be any higher at all than its neighbours, the step down at the left and the set back of the top storey does go some way to prevent harms to this important river front vista and to permit a rational connectivity with its neighbours. The proposed building is still 1.5 storeys too high on the High Street side.

The mass at South Lane is too high, and will likely block light to these properties, despite the claims of the sunlight report and thus create an oppressive corridor. We cannot see that a conservation centric approach has been considered in these two abutting conservation areas. A terrace of well-designed houses to mirror in spirit those on the south side of South Lane would be infinitely better design and more in keeping as well as better preserving the privacy of the houses in South Lane.

The change riverside from a partially submerged ground floor and the subsequent loss of a sixth storey has strengthened the design particularly at ground level, and the increase of commercial space provides a better mixed-use balance. As does the inclusion of 3 bedroom apartments. The staggered relationship between the front and rear properties has the benefit of improving privacy across the interior amenity space.

We were disappointed that the balance of affordable homes has not been finalised as the developers await the viability assessment, but we are glad to note that any such units will be integrated within the overall scheme and not ‘poor doored’.

We struggle with the overall architectural design, which by its position and proposed scale has both aspired to, and de facto become the centre piece of a mixed design terrace.

We are confused why the developers have chosen to illustrate both consultations with a New York building by David Chipperfield Architects (https://davidchipperfield.com/project/1119-jane-street) utilising ruddy-hued bricks and coloured concrete and strong fenestration detailing and then stepped away from this after offering this as precedent and aspiration.

More significantly the second riverside elevation design has resolved into an altogether blander design, and is delivering neither beauty or exemplar design. The recent decision on Tolworth Towers refusing the appeal stated (amongst other reasons, of course) as an indicator of the importance of design: 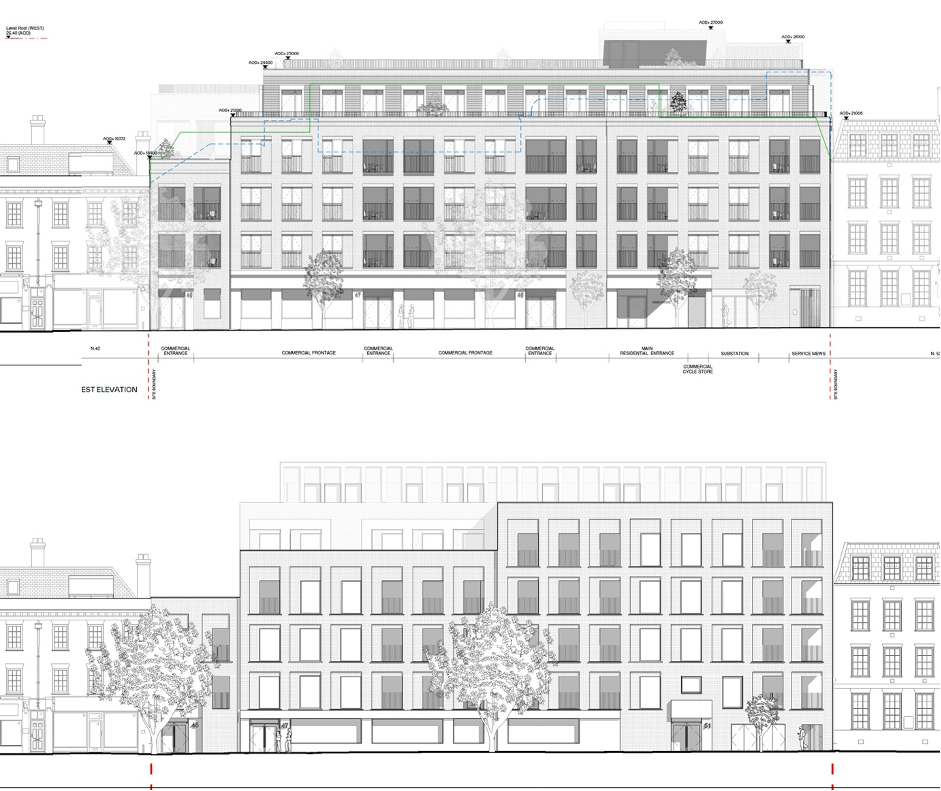 “… As a result, the proposal would not maintain a strong sense of place. Therefore, having considered the architectural and planning evidence on design related matters, I do not consider that the design … would represent a beautiful development as required by the Framework. “

The strength and clarity of the fenestration so apparent in the first scheme has been lost in the revised approach, as evidenced by this montage of the two schemes:

Further, the move from a lightweight, light coloured top storey to a more substantial brick elevation is disagreeable and we think that the contrast in colour and brick pattern on the top does not succeed as an element designed to match the red roof of the building at right. It draws attention to, not away from the upper storey, whose set back continues, to be, we are pleased to note, a useful partial mitigator of the increased building height.

Buildings of this nature, identified some ten years ago by Urban Design London as ‘New London Vernacular’ succeed or fail by their brick work and detailing. Brick is the most enduring and infinitely variable component of British city design, and we ask the council to require the developers to seize the opportunity to explore the limitless creative solutions to this façade. Whilst the terrace as a whole has some cohesion of design there is no reason to believe a more assertively styled building could not reside comfortably with its neighbours.

The buildings below, although in no way intended as a recommendation, demonstrate the immense power that difference and boldness can contribute. At the very least this facade which occupies a very important riverside position needs to be as good as it can be; at the moment it is very much not. Finally, on the riverside elevation, we are puzzled by the sudden change in the ground floor materials firstly next to the first commercial entrance at left, then between the commercial and main residential entrance and again at right by the substation and service mews entrance and feel strongly this adds further harms to the facade. The break frontage may create design dilemmas but this as an entirely avoidable design misstep in our view.

In South Lane we like the provision of street level access to the duplex apartments which will provide passive surveillance but more importantly will contribute to what Jane Jacobs, the American urban design activist, called the “natural proprietors of the street”.

By increasing the office space and losing the car-parking the former becomes a potentially more viable and desirable commercial offering and the greener development is a quiet win, especially with dedicated cycle storage for both commercial and residential users. We commend the thoughtful way the architects dealt with the change in level from the front to the rear of the site.

The introduction of a pavement in South Lane is welcomed, as are the proposed bicycle hoops in the High Street. The service and Blue Badge parking seem well considered.

The use of almost all the roof for green space is good news but we know from experience that poorly designed planting and lack of maintenance by ‘Greenwashing’ developers results all too soon in no green benefits and are encouraged by the claim this will not happen here.

Additionally, we commend the attempts at sustainability and the provision of PV panels to the South Lane roof.

We recommend that this application approval should be granted on a provisional or outline basis only until our concerns regarding the riverside façade height and design have been addressed and resolved.