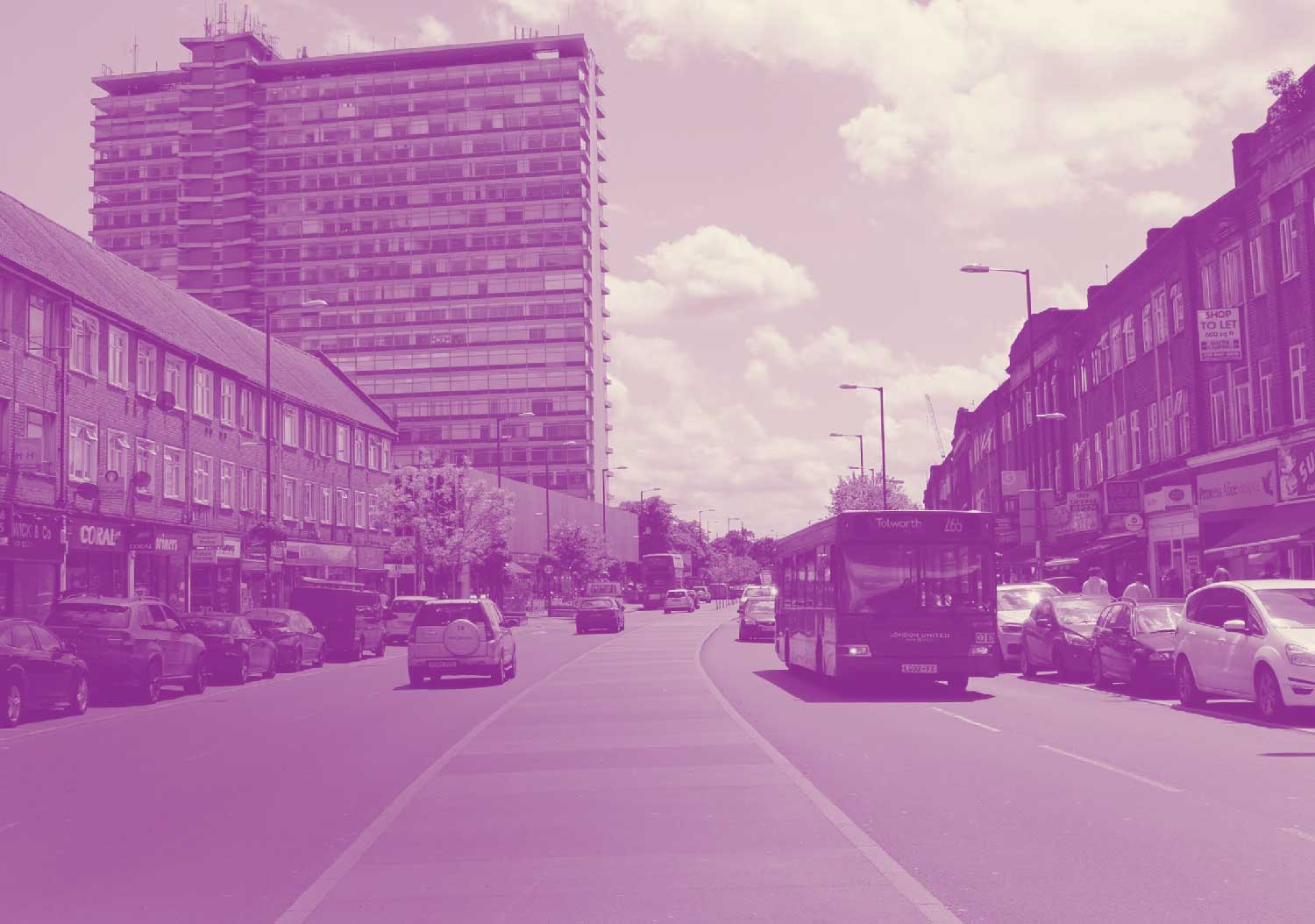 “The Tolworth Area Plan sets out a future vision for Tolworth to help inspire new development and initiatives capable of delivering physical, social and economic improvements. The document will therefore help to focus discussions around the form and type of future development, promoting coherence and consistency between individual projects.”

Of note is the design guidance from page 104 onwards:

A) Focus higher densities and taller buildings around Tolworth Station.
B) Intensify the workspace at Red Lion Road Business Park and Chessington Industrial Estate.
C) New landmark development to help deliver new public realm and improve the crossing of the A3 junction.
D) Introduce landmark building at the junction of Ewell Road and Tolworth Broadway to signify the northern entrance to the Broadway and create a distinctive local character.
E) Deliver a landmark building at the station to provide a focal point for development south of the A3.

Incorrect boundary excludes some stakeholders
The Society firmly believes that the boundary lines for this whole Plan are wrong and therefore flawed, especially to the North and North East [pages 28 onwards]

The Plan should have included the conurbation of Berrylands which historically has always comprised the area of suburban house and roads, whose postal addresses in the past were known as Tolworth. Residents in the Berrylands area often use either Berrylands or Tolworth Stations for rail travel and many use the shops in Tolworth either for ‘top up’ or weekly shopping as it is closer than Surbiton and more convenient/easier to park or by bus. The Society believes that the boundary lines should be Hollyfield and King Charles Roads to the North, the road actually called “Berrylands” further north which is a clear cut off point before residents tend to think that they are in “Surbiton”.

The natural physical boundary to the east should have been the Hogsmill River which clearly defines a line between the conurbations of New Malden and Berrylands. This would have taken in Raeburn Avenue and all the roads leading off it and running towards the centre of Tolworth.

Ditton Road is the obvious line between Surbiton and Tolworth, so all the roads to the east of it and running up to and including Red lion Road should have been included within a more realistic boundary. Similarly, all the roads running between Ewell Road and King Charles’ Road should have been included, as residents there would tend to imagine that they have a Tolworth address even if the Post Office doesn’t support that notion.

Residents in roads such as Douglas Road and all those right up to Hook Road – which is yet another natural line – have been excluded from this plan, yet they would certainly not ally themselves with Chessington, or even Hook as their natural town centres. These residents are likely to use Tolworth as a shopping and leisure destination and their children may well attend either Tolworth Girls School or Southborough Boys School, the latter having been excluded from this Plan. All these students are within the obvious catchment area of both schools and they may grow up and wish to use what is being planned for the Tolworth town centre yet those house have been missed off this map.

Nevertheless the Society agrees and supports some of the guiding Principles in the “Vision Statement” but with some strong reservations.

Cross Rail 2
The first of these which is fundamental to the entire Borough and has been accepted as fact in the ‘Direction of Travel Document’ [page 20 refers]and to which this Society and many other bodies across Kingston strongly objected in 2016*, is the premise that Cross Rail 2 actually will be built [page 23 of the plan].

The Market Analysis referred to on page 39 is now out of date and flawed if the following facts are taken into account:

In the recent budget statement by Philip Hammond on November 22nd there was absolutely no mention of CR2 being funded. Indeed it is well known that the GLA and the London Mayor’s office will not have the funds to pay for all of it, nor will London Boroughs such as RB Kingston. The downgrading of the Chancellor’s Growth predictions suggest that the country and Kingston in particular is facing a significant slowdown in the economy, which is not expected by many experts to get the country out of recession until the mid-2020’s. So if Crossrail 2 is never built or seriously delayed are existing residents across the Borough and especially in Tolworth expected to put up with the enormous amount of development which is being forced upon them whether they like it or not? Should CR2 ever be built informed opinion suggests that it is not likely to be until started until the late 2030’s.

This CR2 premise is another in which this Action Plan is seriously flawed in the opinion of the Society. In his recent decision on the “Tesco” site, the Planning Inspector questioned what amount of weight could or should be afforded to the construction of CR2 and stated that it should not be given undue weight due to the uncertainty of it ever being built.

A3 ‘decking’ travel plan
While the Society does not usually comment upon traffic matters nevertheless we are concerned about the plans for the decking over some of the A3 adjacent to Tolworth in Page 22 of the Plan and in the 2016 Direction of Travel document. These are in the Society’s opinion complete fantasy. It is uncosted and quite frankly in the current and future economic climate [mentioned above] we think that it will never, ever happen. This another ridiculous idea- which may blight residents’ lives and homes in that vicinity – and should be removed from both documents as it is fundamental flawed.

TFL appear to be happy with both this and the plans for Site H in terms of air quality, but as there assertions have not been published in detail in this document we have to question whether either of these proposals can be acceptable regarding their impact on the resulting air quality.

Permitted or anticipated residential schemes would allow around 1360 dwellings to be built in Tolworth, whereas the 2012 Core Strategy suggested less than half that of around 600. This Core Strategy document has been superseded by the DOT* adopted in 2016 but this did not identify specific sites only that “selective redevelopment could take place in this part of the Borough” [page 22 last para]. However the DOT now suggests that Tolworth might accommodate a figure of 2,000 resumably based upon the subsequent various design studies that are set out in the later parts of the document?

The Society questions this figure and objects to many of these studies. We quote from Page 21 of the Plan which.. “reflects upon the quality of the existing built form and characteristics of the area to consider what an appropriate scale and form might be within this area..” The Society is deeply concerned that this statement is not then reflected in any way whatsoever in the development proposals illustrated in later pages.

On page 57 under the heading of Economic Strategy para 3 suggests that existing and future residents are taken into account but if the area has been wrongly drawn* some of them will be affected but haven’t been stakeholders included in this Plan. Ditto on page 56 with the heading ..”movement..” para 1 “connect neighbourhoods” the same opinion of the Society applies.

We question why is this is seen as an improvement and how might it be reconfigured? What on earth is a ‘parklet’ [not explained in the Plan] and who would enjoy sitting in a ‘parklet’ on the edge of the busy A240 road? We don’t think such a notion would ever be used or indeed pleasant, refer to the serious Air Quality issues referred to elsewhere in the Plan. The proposed development is far too high at 8.5 storeys especially in relation to the adjacent RC Church and immediate houses opposite as well as the shops and flats above them on the Broadway.

We suggest that some redevelopment might be appropriate on this site but on a much more modest scale while decrying the loss of the last petrol station in the whole area. Motorists in future would have to use valuable petrol and travel to either Hook or to the Tesco site on the outskirts of New Malden.

The proposed “peninsularisation” […another new word!] is in the Society’s opinion a completely untenable and mad idea. It would cause massive disruption to the traffic which currently flows reasonably well – other than at some but not all- peak times. To suggest that drivers will accept such a drastic alteration especially those exiting the A3 from either the Hook or New Malden direction is quite frankly complete nonsense. It will never work and is likely to be dropped due to public opposition. The development proposals sitting on the back of this notion are therefore fundamentally flawed .The suggested heights of 10-12 storeys on page 124 are completely out of keeping with adjacent house on the A3 slip road and Hamilton Avenue. Who is going to use the benches illustrated on the plan, with traffic immediately in front them and the appalling air quality from all the cars surrounding them likely to affect their breathing?

We might support the idea of some modest redevelopment but 11.5 storeys is just far too high and out of character with the surrounding properties on this side of
the Broadway.

We support these ideas and the suggested heights as they are more acceptable due to the lower impact upon adjacent residential properties, except for the impact upon the 2.5 storey flats** close to the vacant Marshall House site. In all other respects it relates better given the presence of the new Premier Inn and the approved Lidl HQ.

4. SITE A : THE TRAVIS PERKINS site

We support in principle the redevelopment of this site as it would remove a long standing and inappropriate use in an otherwise pleasant residential and parkland area. The notion of an Old persons’ home is very sensible; however we think that the plan shown is far too close to the rear gardens of houses in Elgar Avenue.

We think that some redevelopment is welcome as the current building is an eyesore but we do not support the notion of a building of 14.5 storeys. We think that a maximum of 5 storeys might be more appropriate, especially as it would sit next to the adjacent 2.5 storey high flats**.

We strongly support these ideas as they would strengthen the current sports and leisure use of this site which could be a very attractive draw for residents from Tolworth and from a much wider catchment area.

We support all the ideas contained under this heading as they would hugely benefit residents and visitors from a wider area of the Royal Borough of Kingston and from much further afield.

In conclusion we appreciate the huge amount of effort and work that has gone into creating this very lengthy and detailed document and while we cannot support some of the ideas that we have referred to above nevertheless we will look forward to how it is received by residents and Councilors alike.

We hope to make further representations when the document is finally debated in early 2018 and put before the Growth Committee of the Borough Council for amendment and approval.