In 2022 the Society will present its prestigious Townscape Awards recognising building developments which in the Society’s view have done the most to enhance the environment in the Royal Borough. The candidates are nominated by members of the public, or the Society, and the final selection is made by the Committee.

The nominated projects must be readily accessible to the public and may include:

The Awards take the form of a framed certificate signed and presented by the Mayor as President of the Society at one of our regular Public Meetings. Past recipients have spoken of the high regard in which they hold them.

Every other year the Society presents Townscape Awards recognising building developments which in the Society’s view have done the most to enhance the environment in the Royal Borough. In 2017 the improvement in design standards in the preceeding years was indicated by our choice of six worthy winners from among eleven nominations.

Some of the best Victorian buildings in our town are banks and pubs. Selling alcohol and usury make you rich enough to afford substantial buildings. The banks are now restaurants and pubs are closing so these buildings require new uses. The Alexandra pub is a fine example which we might have lost. It has been beautifully restored as six flats. Flat No 1 has a very grand entrance, No 2 round the corner not so grand, not helped by the diagonal drain pipe A neat extension has been added as the entrance to 3,4,5 and 6. Either side of the pub new houses have been built perfectly in tune with the existing building, not pastiches but in the manner of the period. It is good to see such care taken for a fine old building.

This is unapologetically modern. The use of timber brick and rendering sit well with the old hall which has been given a face lift. The car park feels more like a small town square. On Trapps Lane the hall complements the stone church Round the back the new building still looks good with its soft sedum roof. The new vicarage is small in scale, and of simple materials, the roof pitch echoing that of the church beyond. The careful composition of the disparate parts has produced a harmonious whole

On Richmond Road was the old Penny School, a simple honest Georgian building, a relic of the best English intent, a school for the common child, So much has been lost in Kingston I fought tooth and nail to have it preserved but failed. I have come to terms with the loss and found closure and can look at the new building without pain. It is a thoroughly worthwhile building. It has an interesting window patter and use of brickwork. It turns the corner well. It is a really good building which enhances its site Once again good uncompromising modern design against old works well and the junctions between the two are properly handled.

A showroom for Topps Tiles with flats over. The solid ground floor walls could have been a blank area of plain brick but the architects have broken up the surface using bricks of a different colour and panels of knapped flint reflecting the nearby Lovekyn Chapel. Panels and windows on the upper floors line up coherently, the wall plane recedes and advances to modulate the façade and the glass balconies catch reflections of the clouds. It all works beautifully and logically. This building has a quiet elegant modesty which is a delight to behold.

When walking up Crescent Road to Kingston Hill one encounters a mixture of respectable housing, modern, Victorian and an Edwardian house hard up against a demure, late Georgian cottage. I delight in these juxtapositions and was horrified to see a planning application to demolish this house and replace it with a copy of its neighbour. I objected. Nobody, I thought, could copy the detail of its exuberant neighbour, and yet they have. Every last column, capital, moulded brick mullion, transom and glazing bar has been reproduced with perfect verisimilitude. We have the most splendid pair of semis in the whole borough. We congratulate the client for determination, the architect for meticulous attention to detail and the craftsmen for their fine workmanship. Together they have wrought a miracle. 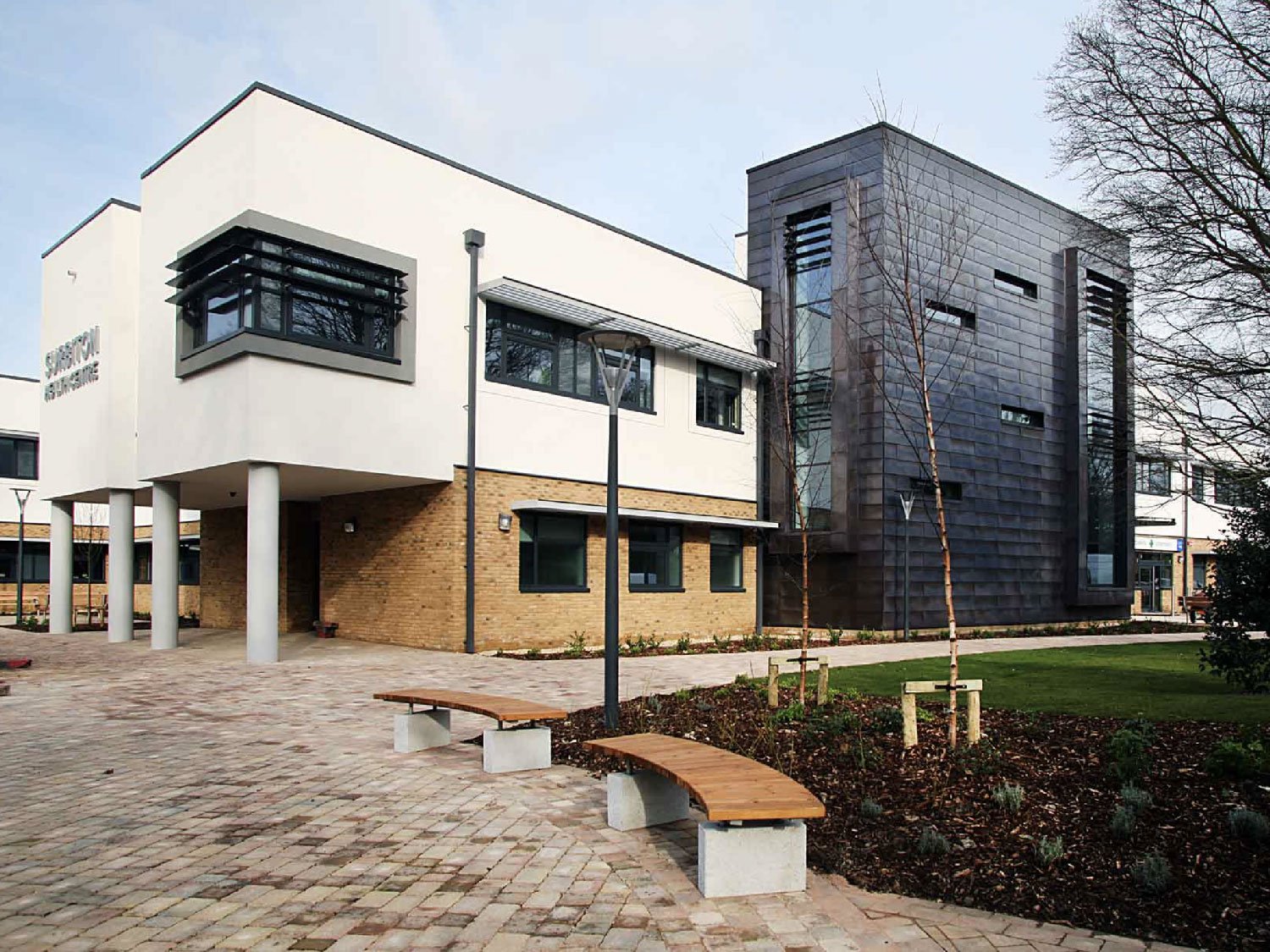 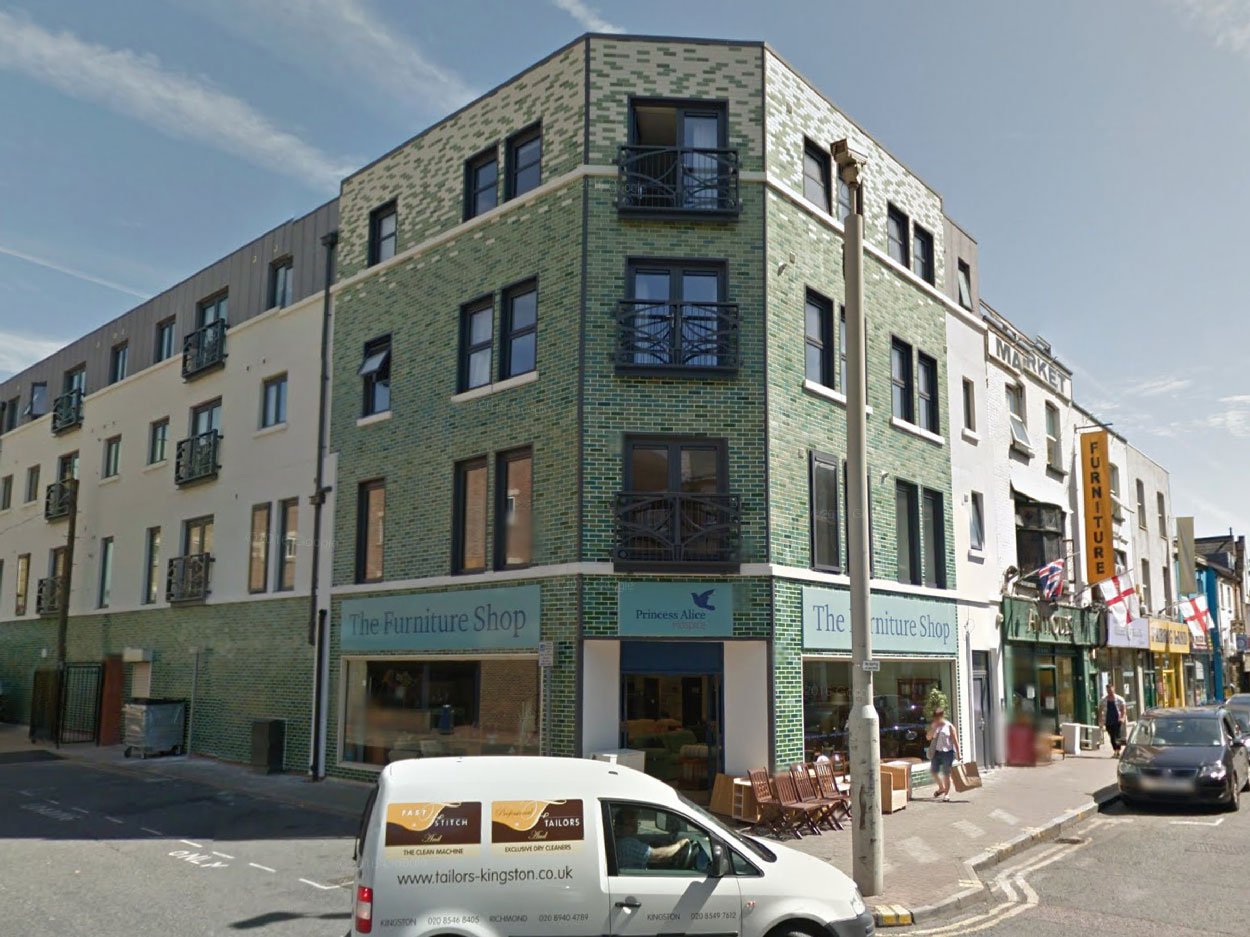 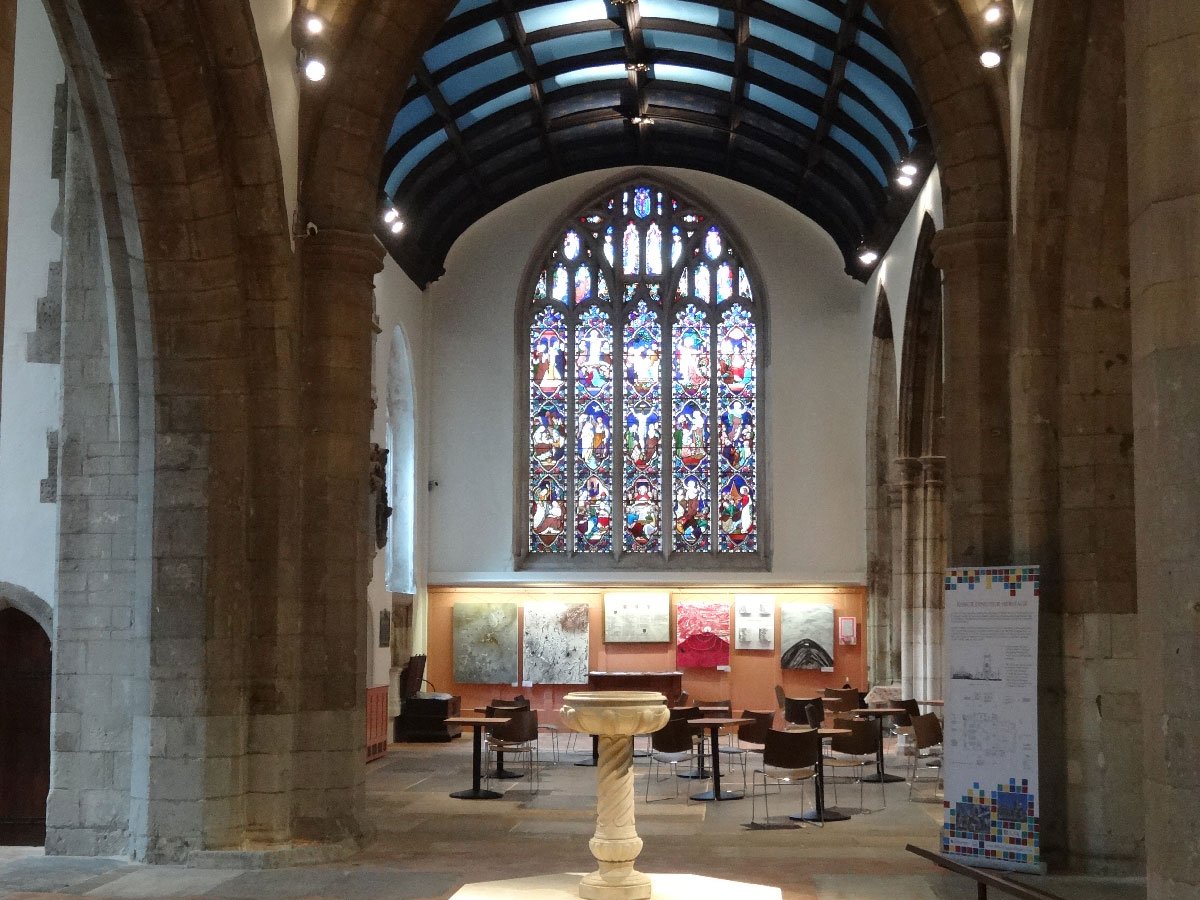 Surbiton Hospital was built in the thirties in then fashionable Art Deco style although the buildings were far from distinguished. The hospital was much loved by the local community, largely for the health facilities that it provided, although as time went by these became outdated. Furthermore, the site was grossly under developed and a decision was made to demolish the buildings and replace them with a Health Centre which includes clinics and two GP practices, and a much needed school, Lime Tree Primary school.

South London Health Partnership was the developer and one firm of architects designed both buildings. Naturally enough the two buildings are of a similar bright modern character, well worthy of our award.

This undistinguished corner building, behind Wilkinsons, houses in its ground floor the very successful Princess Alice Hospice furniture shop. The then owners, Country Designs (Godalming) Ltd, decided to upgrade it prior to selling it on.

The Architects boldly clad the exterior of the building with tiling and this, together with new fenestration, has raised the building from mediocrity to a stunning tour de force which can be appreciated from as far away as Clarence Street.

All Saints Church has been at the centre of the community for centuries and still attracts substantial congregations Sadly it has suffered from the passage of time and has only recently been able to afford to have substantial works of refurbishment carried out, including much needed lavatories.

The interior has been totally replanned. The east end is now largely for secular use, whilst the altar has been moved to the centre of the nave. The font now stands at the heart of the ancient church under the tower. The results are stunning The old north entrance has been re-established, so that the north/south axis enables the public to pass through the church, linking it into the very fabric of the market town. 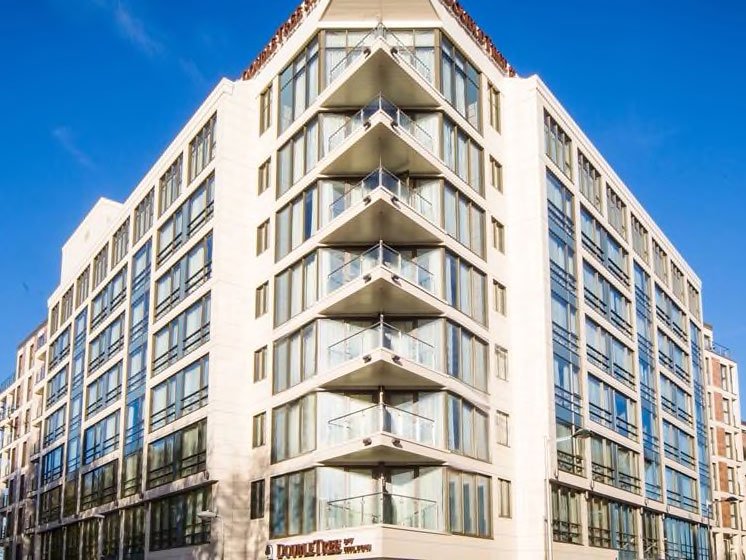 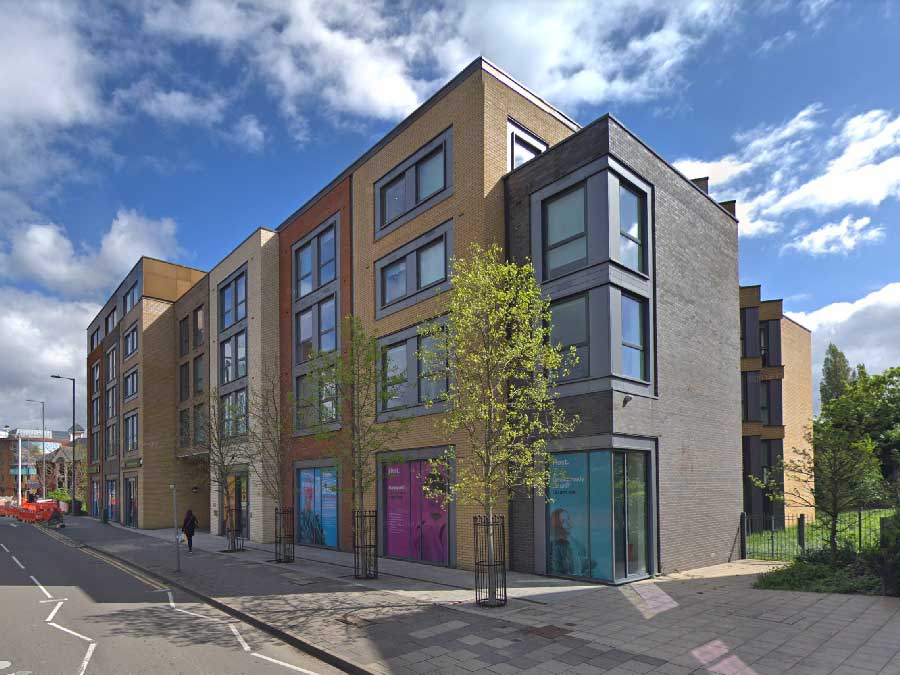 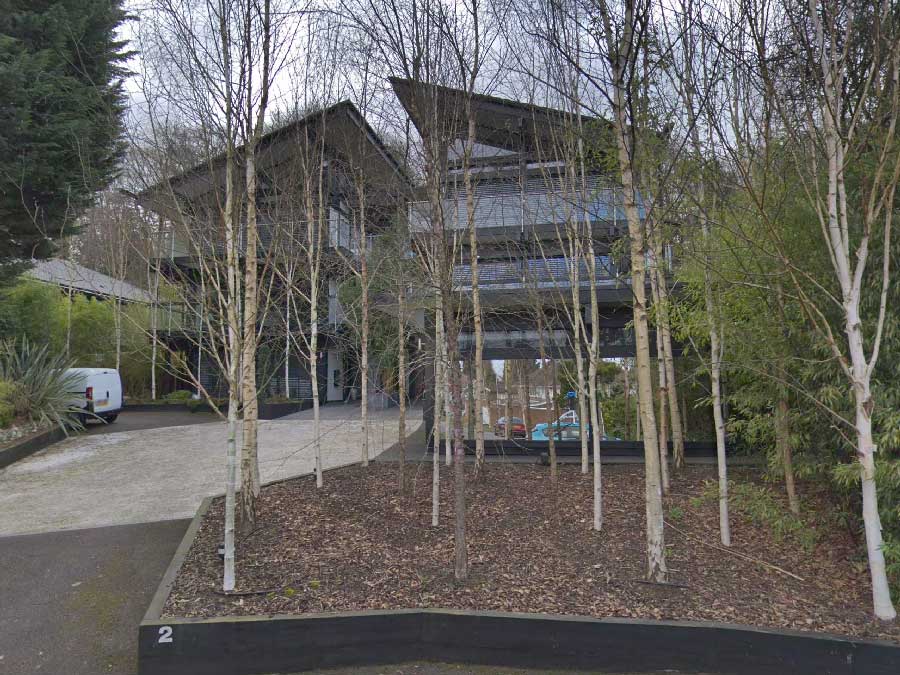 The huge residential development on the site of the old Power Station is now virtually complete The overall scheme is still controversial but we feel that the Hilton Hotel, in the South East corner, is well worthy of an award.

Although a part of gigantic block the architects have managed to give it a character of its own. It is a striking building, beautifully detailed, and turns the corner well.

A rash of buildings has recently appeared in the Borough to house students, not necessarily for Kingston University but in accordance with Boris Johnson’s edict that students should not be housed in Central London but in the outer suburbs. As Kingston has excellent transport facilities it is obviously a good place for such buildings.

We believe that this building stands out for the quality of its overall design and attention to detail, compared to its neighbours.

Mark Lawson bought a house next door to his own in Ullswater Close and, in 2007, was granted planning approval to erect a pair of semi-detached Huf houses. This caused absolute outrage from Councillors but, particularly from the local Ullswater community. So when Mark submitted applications for further Huf houses he was met by furious protests. To cut a long story short, over the period of time five further applications were submitted and bitterly opposed.

A history ensued of refusal, and appeal culminating in an application for two further houses being approved. We believe that the opposition to previous schemes because they did not fit in was unjustified as the Huf design is exceptional Anyway, common sense has prevailed and the result is a group of modern houses as good as any in the world. 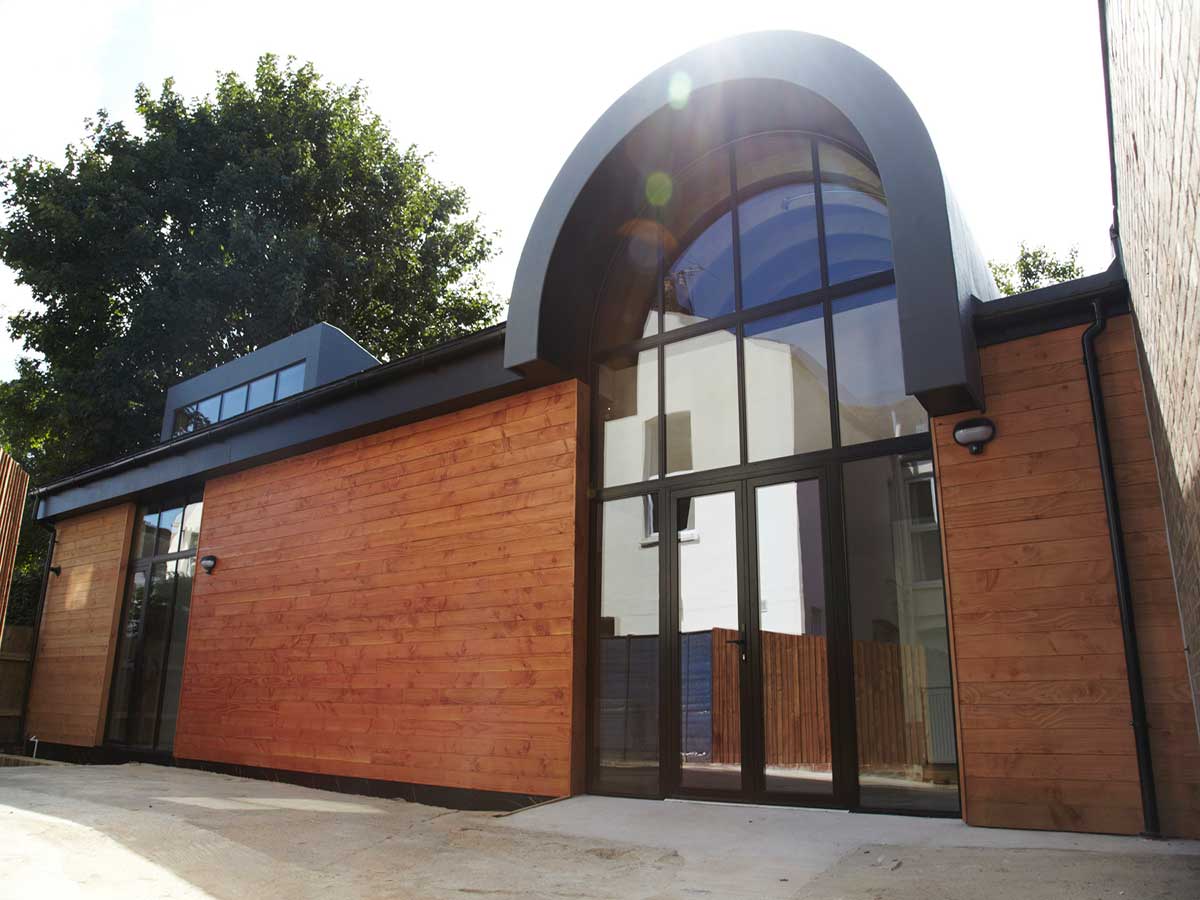 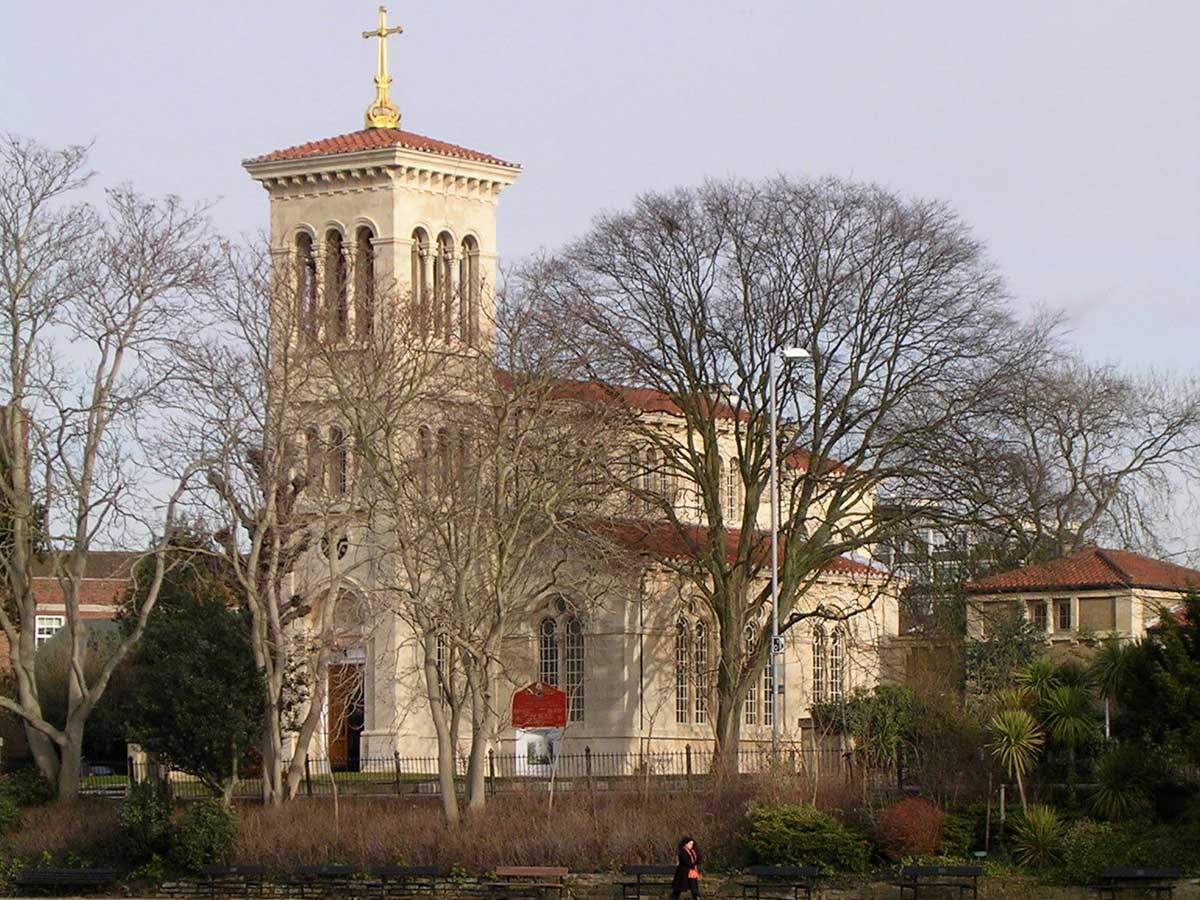 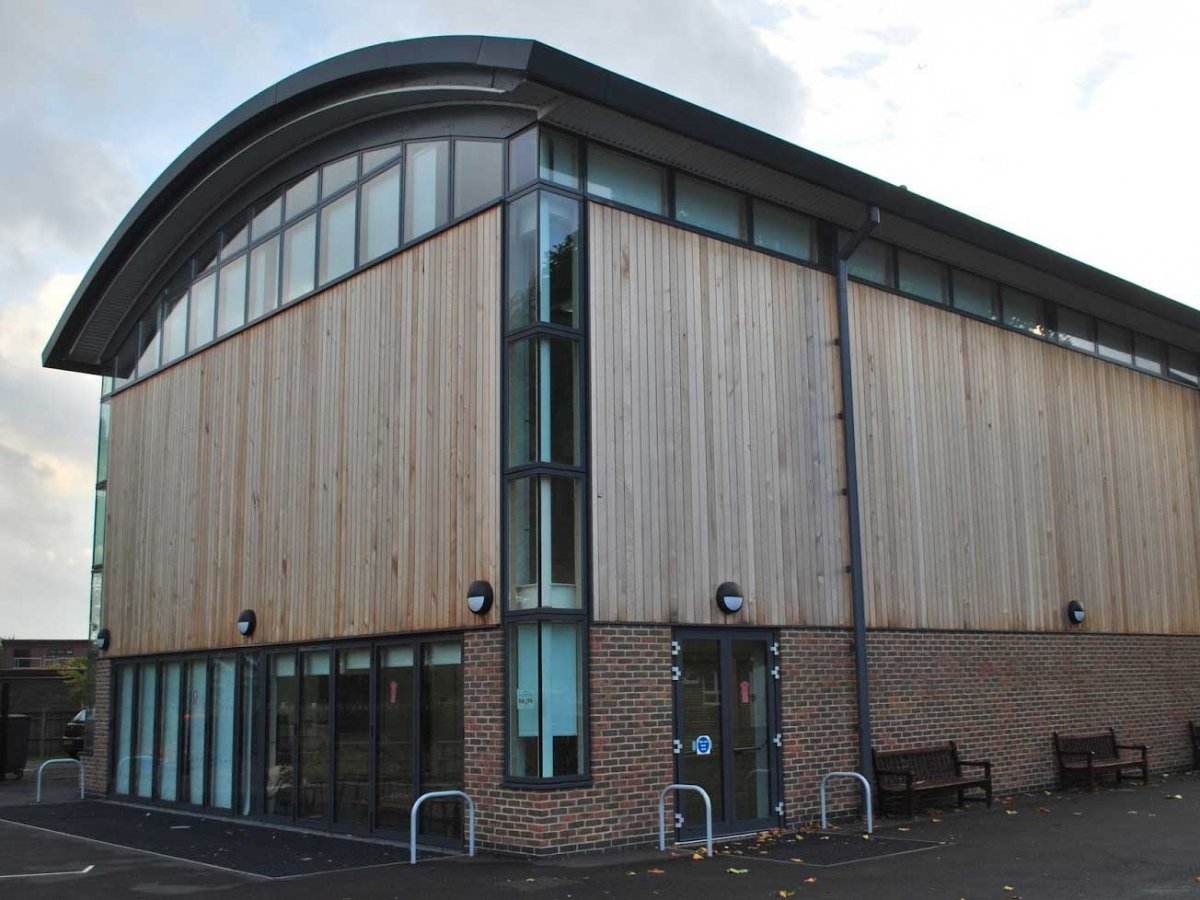 The design is interesting. The restricted view from the street induces curiosity and must help to draw clients in. The clean timber cladding gives it a softness when viewed from neighbours’ houses.

The composition of the Italianate church with its prominent central tower and recessed side wings is one of the more delightful features when approaching Kingston along the Portsmouth Road. It has been beautifully restored externally and internally. The sun glinting on the gilded cross surmounting the tower is a sight to behold. Behind the southern pavilion a new church hall has been added, which is perfectly in character with the main building.

The original thirties single storey school in red brick has been delightfully extended at the west end in a similar style. This project, however, is separated from the main complex and, as it is completely different in scale and function it seems acceptable to design it in a contrasting style which makes its own mark. The design is well thought out and uses well detailed timber and glass to advantage in a truly contemporary manner.

The stonework has been restored and replaced where necessary, the windows, once a hotchpotch of different styles, have been replaced with consistent sashes. The central arch, originally the formal entrance to the barracks, has been kept open. Though now converted to apartments one would hardly know that any alteration had occurred and it looks better than it has for many years.

A modest but decently designed shop and building above on the corner of Kingston Hill and Queens Road has been extended in a respectful manner. Reference is also made to the adjoining houses in Queens Road. By using a mixture of render and brickwork , and incorporating simplified Victorian details, a building has been produced that fits in perfectly without resorting to pastiche. The Architect, in this case, is also the developer which, I venture to suggest, may have contributed to its success.

The Architects for this new store have brilliantly designed a thoroughly modern building with clean rectangular lines and exquisite detailing. It is not easy to be different in a modern style without being brash but this shining example shows how it can be done with style and even dignity. We also noted that the roof and rear of the building are covered with a multitude of solar panels

Do you know a building suitable for this award?

Let us have your thoughts

Get in touch
Page load link
Go to Top