While the need for more residential building is acknowledged, the Tudor Williams site is not the right place for a tall building.  The High Street and Cambridge Road context is of low-rise buildings.  The site is suitable for a building no higher than the former Tudor Williams store. 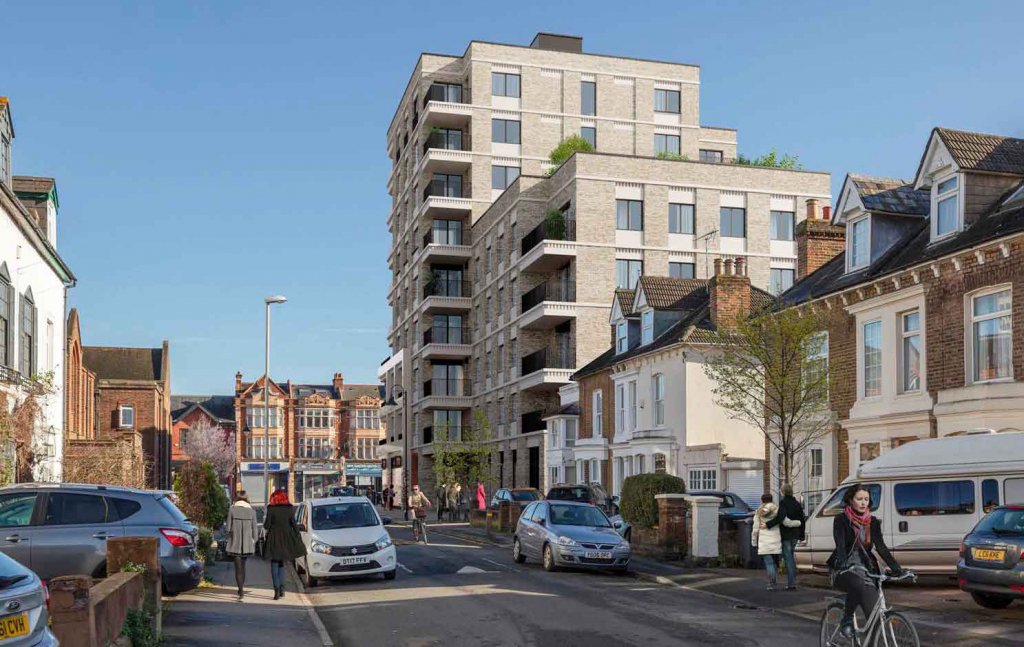 The Tudor Williams site is suitable for redevelopment, and mixed retail/residential use would be appropriate, if it is in line with the existing character of the High Street.

New Malden residents highly value the ‘village’ feel to the High Street, the fact that it is not dominated by large and tall buildings – even the former Town Hall is on a very modest scale. Given the lack of housing, the site represents an opportunity for gentle densification, but the scale and design of the proposed new building is unacceptable because of the harm it will do to the ‘village’ character of the High Street and the setting of nearby heritage assets.

The application also contains several misrepresentations of official guidance and policy, and there is a significant discrepancy in the applicant’s Design and Access Statement’s presentation of the Kingston Design Review Panel’s report.

Moreover, the number of affordable homes offered by the proposal is inadequate; 5 out of 49, 10%, when the Council’s policy is for a target of 50%.

The predominant character of the High Street is of 2 to 3 storey buildings with retail shops on the ground floor and residential accommodation above, and essentially the Tudor Williams building conforms to this. The proposed building would be a radical departure from this form. It would have a poor relationship with the smaller scale and variety of buildings and roofscape which characterises the High Sreet. The significant difference in height, mass and form to the existing adjacent buildings is starkly shown in the East Elevation drawing and the illustrations in the TIVR.

At a maximum height of 32.25m, the proposed building has to be assessed as a “tall building”. No justification is presented for having a tall building apart from the unstated presumption that this is the best way of maximising the number of residential units that can be squeezed on to this site, its ‘density’.

The applicant’s Planning Statement misrepresents Council policy CS8 by saying that it states that “town centres are appropriate for tall buildings. As such, given the site’s location in the heart of the town centre, it is considered that the site is an appropriate place for a tall building” (6.1.62). In fact Policy CS8 says (with my emphasis):

“Tall buildings may be appropriate in the Borough’s town centres; however, some parts of these areas will be inappropriate or too sensitive for such buildings.” (p.134)

Before this CS8 states that the Council “will seek to ensure that new development;

The proposed design fails to respect the local features and character of the High Street. Rather than enhancing it, it would dominate and not relate well to its surroundings, as the visualisation below demonstrates:

Seen from the Dukes Avenue/Grafton Road junction as above, the proposed building would disruptively break the roof line of the existing buildings on its own side.

The Design and Access Statement states that the proposed building “acts as a mid-rise ‘bookend’ to Cambridge Road”, with the tallest element “set back further from the High Street and Cambridge Road to reduce its prominence at a local scale” (p.52). There is no need for such a bookend – the Methodist Church next to the site already provides punctuation on this side of the High Street, as does the War Memorial/former Town Hall on the other side.

Higher density developments have to be in the right place as Robert Jenrick’s direction in his letter of 13 March 2020 to the Mayor makes clear (with my emphasis):

“Optimising density: It is important that development is brought forward to maximise site capacity, in the spirit of and to complement the surrounding area, not to its detriment. Sites cannot be looked at in isolation and Londoners need to be given the confidence that high density developments will be directed to the most appropriate sites; maximising density within this framework. Examples of this are gentle density around high streets and town centres, and higher density in clusters which have already taken this approach.”

In accordance with this, this proposal does not complement the surrounding area, is not in the same spirit, is not in the right place, and although it is in a high street is not in a higher density cluster. Given the site’s context, gentle densification would be appropriate, not this form of over-densification.

Two Design Reviews have been carried out, which is commendable. But the developer has distorted the message from the Panel’s first report in its summary in the Design and Access Statement:

“Feedback: Height– A taller building in this location needs further justification in line with potential future development along the High Street

Response: Height– Height has been reduced – Revised height has been considered within the context of potential future development height zone along the High Street” (p.31)

1.1. The Panel was not convinced by any of the justifications put forward for a 13-storey (and bulky) building in this location.

1.2. The site is too distant from the cluster near the railway station and the emerging cluster at Cocks Crescent to form part of either. A ‘marker’ is not necessary at this location: it is not by a transport interchange, nor is it a node – the corner of High Street with Cambridge Road is not major. Masking of distant tall buildings is hard to sustain as an argument (and tends to undermine the marker role that the masked buildings may have). Stepping down from one cluster to another over-states the relationship of the two clusters, though a building on this site which is taller than its immediate neighbours – if supported – certainly should not exceed the lower cluster.

1.3. The height of the scheme cannot be said to have justification through an SPD or other planning policy for this location. The scheme may have some public benefits but not of a magnitude commensurate with a tall building lacking other cause.

1.4. New Malden High Street frontages are generally of three storeys of clear (and almost unbroken) legibility. A departure from the three-storey datum even to medium height needs a cogent case. The scheme at present would mean a prominent and awkward intervention in the street.

Regrettably the composition of the Design Review Panel initially with six experts changed significantly for the second review by being reduced to three, and the developer’s inadequate response to these points – which constitute the proposal now under consideration – were not challenged by the depleted Panel, missing its key Historic Environment, Planning, and Stakeholder Engagement expert. However the Design Review Panel’s comments above remain a relevant criticism and have not been adequately addressed by the applicant.

As the applicant accepts, there are several heritage assets nearby which are relevant. However it blithely states that “there is considered to be no harm to their setting as a result of the proposals” (p.57).

The closest heritage asset to the Tudor Williams site is the locally listed parade of shops at 40-64 High Street, directly opposite the site. Slightly further away are the War Memorial, Grade II listed, and the former Town Hall, locally listed. My main concern is the impact on 40-64 High Street. The proximity is best illustrated by the wide-angle Google Street viewed from the north (with apologies to Google) :

In addition the London Plan says that “proposals should take account of, and avoid harm to, the significance of London’s heritage assets and their settings… The buildings should positively contribute to the character of the area” D9.C.1(d). The London Plan goes on to say that high density does not need to imply high rise; tall buildings “can also have detrimental visual, functional and environmental impacts if in inappropriate locations and /or of poor quality design” (3.9.1).

This application certainly pays inadequate regard to 40-64 High Street. It is interesting to contrast it with the more harmonious redevelopment around the former Town Hall (Waitrose etc) and Mace House on the other side of the Methodist Church. It is difficult to see how the proposed building would preserve or enhance the heritage asset of 40-64 High Street, and certainly does not respect this feature of local importance. Building a monolithic nine storey tower opposite this three storey parade would be very detrimental to its setting, and fails to respect its local character and the distinctiveness of the High Street’s street scape in terms of height, scale, massing and form.

A lot is said in the supporting documents about not prejudicing future nearby redevelopment, but nothing about the future heritage status of other nearby buildings e.g. the Methodist Church. If this was proposed for heritage designation, either statutory or non-statutory, its setting would be utterly compromised by having such an overbearing and dominating building next to it. The nine storey height of the proposed building is minimally set back on its northern elevation, the side opposite the Methodist Church, as the visualisation above shows.

While the need for more residential building is acknowledged, the Tudor Williams site is not the right place for a tall building. The High Street and Cambridge Road context is of low-rise buildings. The site is suitable for a building no higher than the former Tudor Williams store.

The London Plan says “Many heritage assets make a significant contribution to local character which should be sustained and enhanced” (7.1.4). This application would be detrimental to the local heritage asset of 40-62 High Street.

For these reasons I urge the Council to refuse planning permission for this damaging application.