Skip to content
An Urban Room for Kingston upon Thames?

Briefing paper: An Urban Room for Kingston upon Thames? 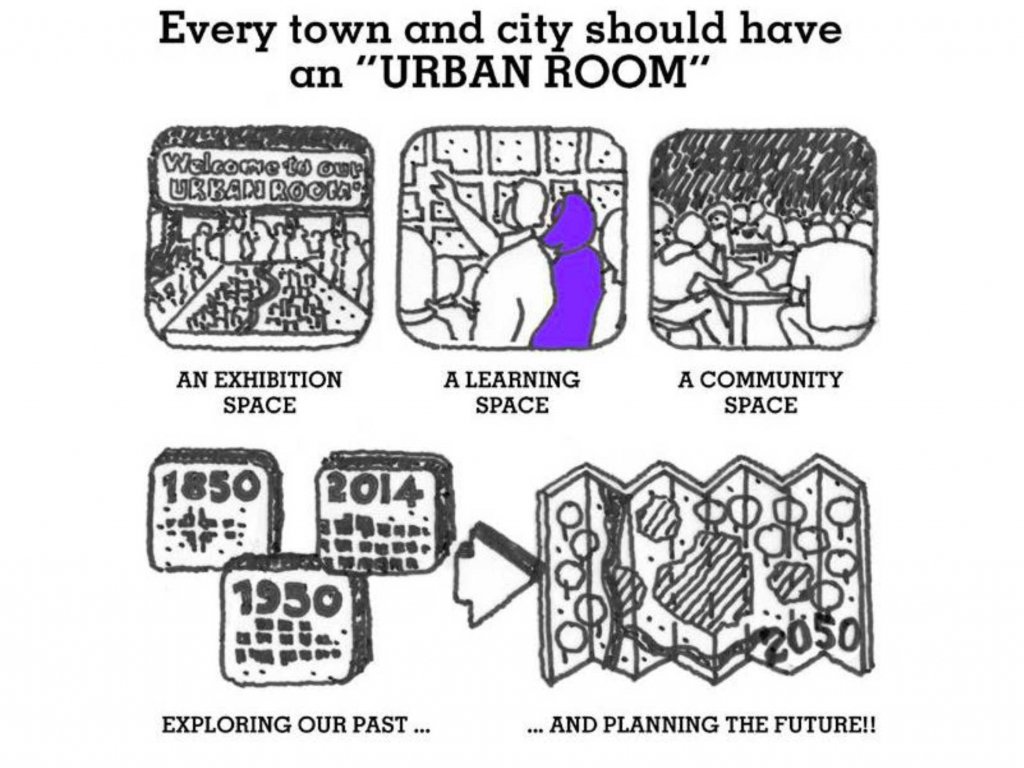 The term Urban Room was coined by the Farrell Review of architecture and the built environment (2014), as a collective label for spaces where a town’s inhabitants can come together to debate the future of their urban area. Its conclusion was that:

Every town and city without an architecture and built environment centre should have an “urban room” where the past, present and future of that place can be inspected. Virtually every city in China has one, in Japan they are a mix of display and meeting places, and there are successful examples closer to home like the Cork Vision Centre. These “Place Spaces” should have a physical or virtual model, produced in collaboration with local technical colleges or universities, and they should be funded jointly by the public and private sector, not owned exclusively by one or the other. Urban rooms should be connected to and supported by the regional branches of the PLACE institutions and agencies and could be branded with the name of that place (“Place Space: Sheffield” or “Place Space: Reading”, for example). [p. 162]

Around twenty urban rooms both permanent and temporary are now linked by the Place Alliance Urban Rooms Network,

The need for Urban Rooms

The Government’s recent Housing White Paper, Fixing our broken housing market repeats an important association that Governments of all political persuasions periodically make; between design quality and the positive engagement of communities in the development. It argues: “Inadequate community involvement can fuel objections, cause delays and increase the risk of poor quality outcomes”, and the Government wants “to ensure that communities can influence the design of what gets built in their area”. It concludes that “To really feel involved in the process, we need to help local people to describe what good design and local character looks like in their view”.

An Urban Room is a powerful way of involving people in the design process for their area. Urban Rooms are beginning to spring up around the country, often with universities taking a leading role in their establishment.

The Place Alliance’s Big Meet 7, “Engaging Communities in Place-Making”, recently held at UCL, explored what is meant by good community involvement. It was common ground that token engagement will rarely get communities on side. Consequently, if we are serious about better involving communities in decisions relating to their built environment, we need to move beyond our normal practices to more fundamental, active and sustained forms of participation. The conclusion of discussions at Big Meet 7 was that the new breed of architecture and built environment centre, the Urban Room, does seem to have the potential to provide a more active, participative and effective way of filling the current gap.

What is an Urban Room?

An Urban Room is a flexible model; Farrell envisaged it as a space with a model of the local built environment, highlighting future developments and providing historical context. New London Architecture’s 1:2000 scale interactive model of central London is a good example. The important thing is that it should be a space where the widest possible audience can be engaged, ideally on a high street location, like Sheffield’s Live Works. It need not be permanent; the Church Street Urban Room was done on a temporary ‘pop up’ model, making use of an unused shop. Sheffield has also experimented with a mobile urban room, to reach outlying areas.

Or they might even be virtual spaces, with online debate organised through social media. Virtual 3-D models of towns are available, e.g. by Arup, which could show significant consented and proposed schemes, to give a better understanding of their impact. Funding for an Urban Room might be part of a wider economic development strategy combining both public and developer resources.

An Urban Room for Kingston

The borough of Kingston upon Thames is facing unprecedented development pressures; the Mayor of London’s housing targets, Cross Rail 2 etc. Schemes such as the Old Post Office site in Kingston centre and the Cocks Crescent SPD in New Malden have aroused enormous public opposition. And yet there is nowhere that is presenting individual development proposals for Kingston or a strategic overview, and communicating them to the public. Given that so much change is happening to the built environment in Kingston, a neutral forum where the community can engage with development proposals, and developers can communicate and consult about their plans, seems desperately needed.

This is the role of an Urban Room; to provide a space where proposals can be discussed, ideas generated and plans developed. A model, virtual or actual, could help to give context and highlight possible linkages. Individual planning applications could be shown, with separate displays for large scale developments. It could also provide a rich educational resource for local schools and colleges.

A role for Kingston upon Thames Council

Kingston Council’s ambition is to create sustainable places where people will want to live and which will help people to meet their aspirations and potential. The Council rightly regards community participation and involvement as essential to achieving its community outcomes and the priorities and objectives highlighted in its Housing Strategy 2015-2020. For example, the Strategy includes an objective to involve local people, and wants to engage with its residents in the most effective and efficient way to ensure all residents’ views are represented in decision making processes (Objective 9). An urban room would be a highly effective way of helping to achieve this objective. Through giving Kingston Council’s support to the exploration of the feasibility of a Kingston Urban Room, it would be demonstrating commitment to community participation, and the Council could play a leading role in its genesis and direction.

▪ The borough of Kingston faces enormous change in its built environment
▪ To ensure development is sustainable and successful, better public engagement is needed
▪ Nowhere currently provides a neutral forum to engage the community
▪ As the local planning authority for the Royal Borough, Kingston Council has a duty to ensure proper public consultation about development proposals
▪ The model of an Urban Room could provide an effective response to improving public engagement.

The Kingston Residents Alliance and the Kingston upon Thames Society support the idea of an urban room for Kingston. Other potential supporters/partners are being approached, including the University of Kingston, with a view to setting up a working group to explore the feasibility of the proposal, and its aims and objectives, and perhaps what form a Kingston Urban Room might take.